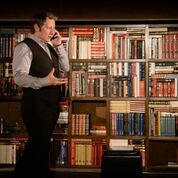 Using a sports analogy to praise the latest offering from Robert Lepage will seem odd to some theatregoers, but watching the ingenuity and versatility of Lepage for his new, one-man extravaganza of stagecraft, commentary, poignancy, history and poised performance, 887, reminded me of the feeling of awe that arises whenever I watch even a few minutes of athletic performance by the new reigning superstar of the NBA, Stephan Curry. But the ever-transforming narrative is equally sociological. We get the FLQ crisis. We get the national flag debate. We get the history of the term ‘Speak White’ in keeping with Lepage nervously preparing for a public recitation of the poem called ‘Speak White’ that was composed by Quebec’s Michèle Lalonde in 1968. There’s an episode in which he recalls being a naïve school boy taking over his brother’s paper route and being forced to empty his papers onto the road at gunpoint to prove to the police that he was not a terrorist during the imposition of the War Measures Act. Ideally a film version of 887 could be made for distribution to all Canadian schools.