Born of a respectful friendship with the artist, Robert Amos has produced a new book on E.J. Hughes. 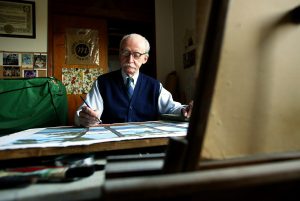 E.J. Hughes at work in his Duncan studio, 2003. Photo by Darren Stone.

Even though the reclusive Hughes looked like Thomas Hardy, he became a star in his eighties.

“B.C. is the best place in the world for landscape subject matter.” — E.J. Hughes

“One of the main reasons I paint is because I think nature’s so wonderful that I want to try to get my feeling down about that on canvas, if possible. I feel that, when I am doing my painting, it is a form of worship.” – E. J. Hughes, speaking on The Lively Arts, a CBC television production in 1961.

With the exception of Emily Carr, nobody has painted British Columbia so vividly, for so long, and so well, as E.J. Hughes.

Book launch events have been scheduled for:

This volume had a long gestation period. According to Amos’ account for the Times Colonist: 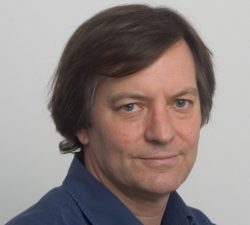 “I was surprised, one day in 1993, to receive a phone call from his assistant, Patricia Salmon. She said Hughes knew about me from my writing in the newspaper, and wanted to thank me for my encouragement. Hughes was coming to Victoria, for his car’s annual service, and would like to take my wife and me for lunch. Surprised and delighted, we joined them at the Snug at the Oak Bay Beach Hotel.

“Far from being a hermit, Hughes was only too happy to answer questions and tell us stories about his life. To help the conversation along, Salmon brought a paper bag full of snapshots, as well as some drawings by Hughes and a couple of his etchings. We covered the table with this material and sorted through it over the next two hours. In the end, she left me with a good portion of the photographs, and they became the beginnings of my archive of things relating to E.J. Hughes.

“There was much about this man — his upright posture, his tweed jacket and tie, and his patient and attentive demeanour — that made a visit with him seem like visiting someone for whom time had stopped in the 1930s. Out of gratitude, I wrote a note of thanks to the elderly gentleman, and over the next few years, my wife and I received a number of handwritten and carefully composed letters from the artist.

“I didn’t want to presume upon the basis of our meeting to take things further, so I was pleased to receive another invitation, in 1996, for my wife and me to have lunch with Hughes. He and Salmon met us in Duncan and took us to his home, to see his studio.”

Vancouver Island locales for the more than 60 works in Amos’ book include Sidney, past Goldstream and the Malahat to Cowichan Bay, Genoa Bay, Maple Bay, Ladysmith, Nanaimo, Comox and Courtenay, along with Hughes’ handwritten notes. 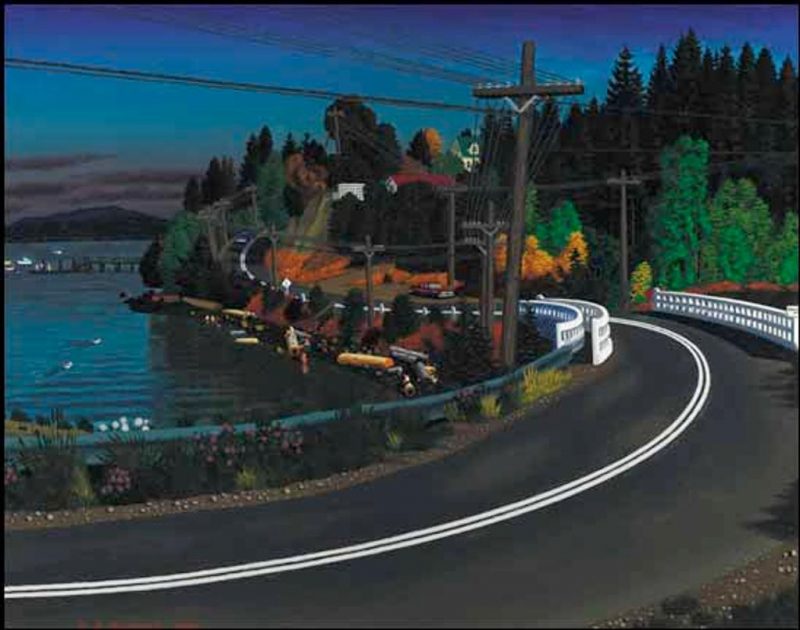 A portion of this Hughes image of the Davis Lagoon Bridge, at Saltair, was on the cover of BC BookWorld in 2002.

By the early 1950s, Hughes’ paintings were part of every major public collection from Ottawa to Vancouver, but his reputation was never firmly established until he reached old age. A major Vancouver Art Gallery retrospective of E.J. Hughes’ career opened in January of 2003 and ran for six months, in conjunction with the release of a coffee table book, solidifying Hughes’ slowly-won reputation as the most popular interpreter of British Columbia landscapes. Jack Shadbolt praised Hughes as “the most engaging intuitive painter of the BC landscape since Emily Carr.” Eventually one of his paintings entitled Rivers Inlet sold for $920,000 in 2005, the highest price ever paid for a work by a living Canadian artist at the time. Whereas in 2001, a painting entitled Lake Okanagan was sold at a yard sale in Ontario for $200, its purchaser was able to re-sell it six years later for $402,500. 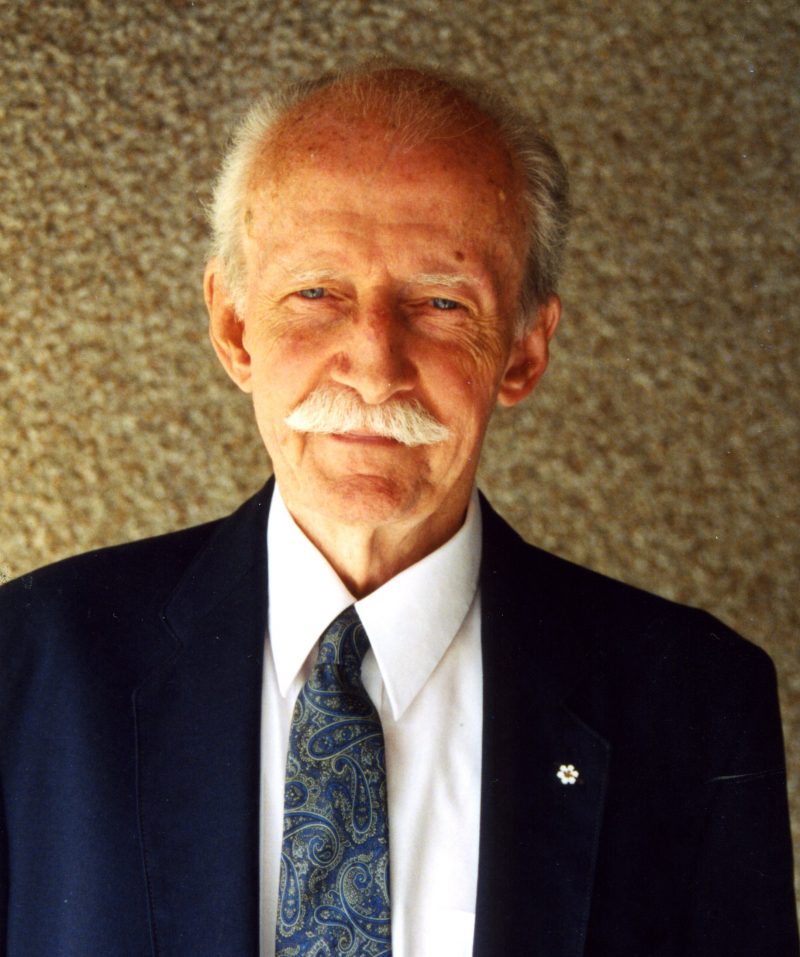 Born in North Vancouver on February 17, 1913, Edward John Hughes grew up in Nanaimo and North Vancouver. During the Depression, Hughes studied at the Vancouver School of Decorative and Applied Arts. In 1934 he co-founded a commercial art company with muralists Paul Goranson and Orville Fisher. He enlisted with the Royal Canadian Artillery in 1939 as gunner, posted to England. He served as one of Canada’s first official war artists (as did Jack Shadbolt) from 1943 to 1946, supplying approximately 1,600 works now in the Canadian War Museum. In 1946, he returned to the West Coast and settled at Shawnigan Lake with his wife, Fern.

In 1951, art dealer Max Stern, who had “discovered” Emily Carr in 1943, tracked down E.J. Hughes in the wilds of Shawnigan Lake, Vancouver Island, on the advice of Lawren Harris. “The meeting proved to be fascinating,” recalled the owner of the Dominion Gallery in Montreal. “There was a shy painter who was not at all aware of the unusual quality of his work, an artist who was not really convinced of his own talent. So—as I had done seven years earlier in the case of Emily Carr, whose representative and agent I had become—I decided on the spot to take Hughes under my wings.”

Soon Hughes’ career gained momentum. Referring to Hughes’ painting Tugboats, Ladysmith Harbour (1950), the Group of Seven’s Lawren Harris said, “Nothing quite like it has been done here or anywhere in the country. Everybody likes it; painters, laymen and just folks. It’s that kind of painting—factual, detailed, accurate, full of interest but its art quality transcends all of these.” 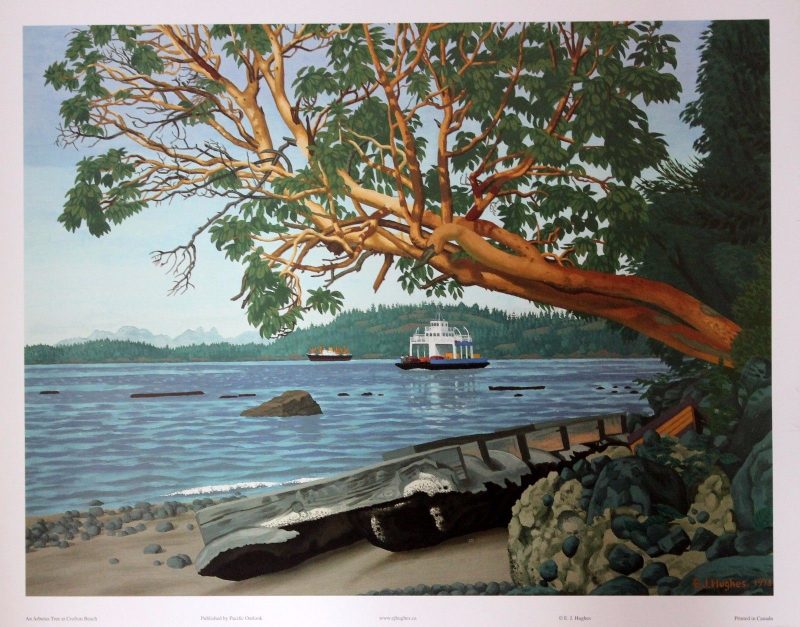 An Arbutus Tree At Crofton Beach, circa 1990s

After their first meeting, Stern bought all of Hughes’ work then available in the studio—for $500. “An enduring friendship was to develop over the course of those years,” writes Thom in the chapter, A Tremendous Intensity, “through a long series of letters between artist and dealer, one that is probably unique in Canadian art…. For Hughes, who was never good at meeting the public or promoting himself, a dealer provided not only the assurance of a steady income and a degree of protection from the world at large but also, for most artistic purposes, his public face.”

By the late 1950s, Stern wasn’t afraid to offer tough criticism. “I feel I should draw your attention to one or two things which I find disturbing in your latest painting,” he writes. “The highly coloured columns, which look a bit like lollipops, in the bridge may be in existence, but artistically they are not beautiful and I would have preferred you not to paint such subject matter.”

The pressure of generating new work is apparent in Hughes’ replies. He could be his own harshest critic. “I would like to work and work and rework each one… until it gave me a good feeling, but you can realize that this would permit me to produce only three or four paintings a year, and I could not make a living at it that way. The way it is now, the occasional painting is good (about one in five or six, I think) but that is due a lot to happy accident when they are turned out as fast, and that I don’t like…Leonardo’s Mona Lisa sure would have lost out if he had spent only two of the four or five years he took to complete it. It is thinking about him… that partly makes me feel so awful to send away a ‘half baked’ painting.”

Despite struggling with production, E.J. Hughes was no slouch. During his stint as a war artist in WW II, he produced 1,000 drawings and almost 30 complete paintings. “Sometimes I was working so hard I was wishing that I was a combat soldier…they at least had a lot of time off to rest, you know… As soon as I woke up in the morning, I had to be looking for subject matter continuously… until dark.” 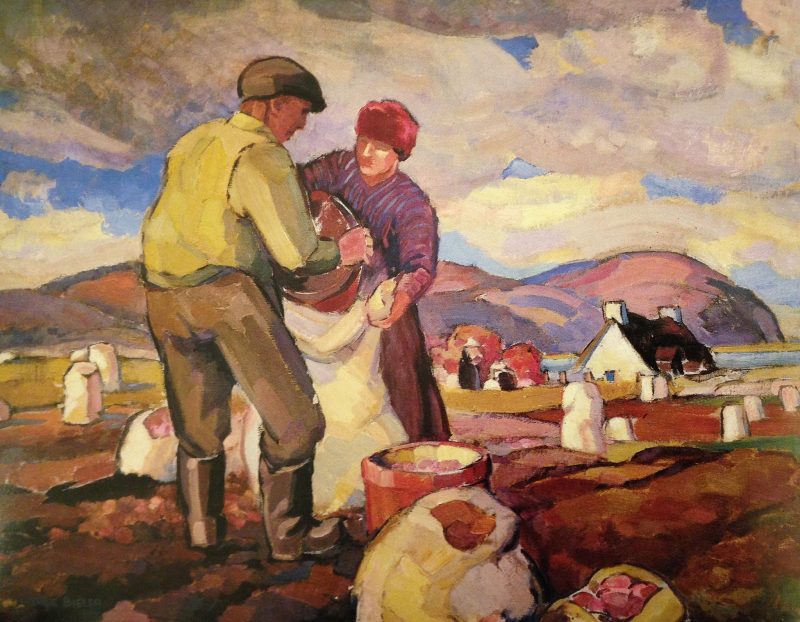 As a war artist, Hughes was given a letter stating how his military scenes were to be depicted: “You are expected to record and interpret vividly and veraciously (1) the spirit, character, appearance and attitude of the men… (2) the instruments and machines which they employ and (3) the environment in which they do their work.” The exactness demanded by the letter would have fit with Hughes’ clear, detailed style. 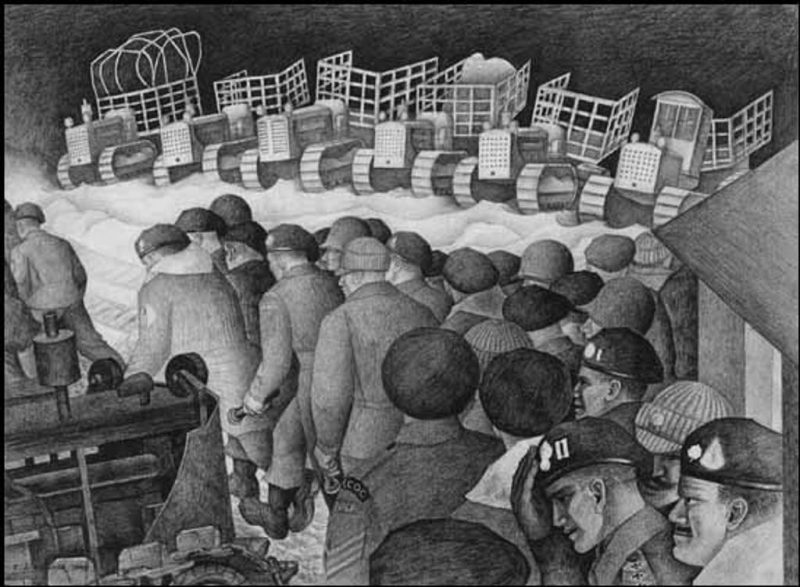 Servicemen after a movie at Kiska in 1943.

“There can be little doubt,” says Thom, “that the careful study of machinery and details of uniforms sharpened his skills as a draftsman and observer, just as doing detailed sketches rather than broad treatments was to have a profound effect on his working methods.” 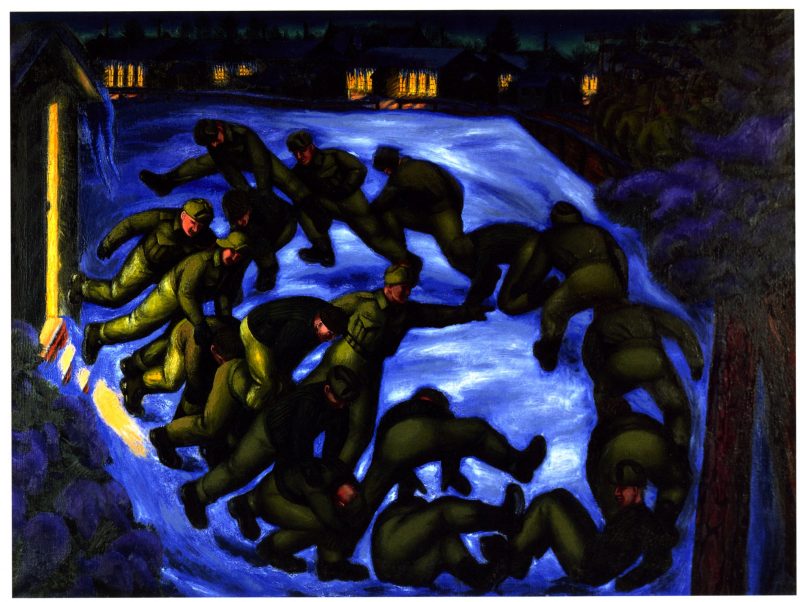 After his service in WWII, including visits to military installations and camps in Alaska, Hughes’ decision to focus on landscapes rather than people was largely practical. “I wasn’t sure whether to have figures predominating or landscape, but by the time the ‘50s arrived I had decided to emphasize landscape, not only because it gave the feeling more strongly of the B.C. and Canadian environment… but because I felt landscapes would sell more readily, and not being equipped psychologically to be a teacher or a commercial artist, that was important.” 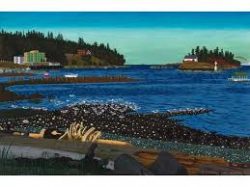 As of 2003, E.J. Hughes was still living semi-reclusively near Duncan, where he had resided for decades. Unabashedly commercial in his motives, Hughes was generally considered the most collectible, contemporary interpreter of West Coast landscape, rivalled only by Toni Onley whose work was much less varied. Elected to the Royal Canadian Academy of Arts in 1968, Hughes received the Order of Canada in 2001 and the Order of British Columbia in 2005. Only the University of Victoria and Emily Carr College of Art conferred honorary doctorates, an indication as to the extent that E.J. Hughes has long been undervalued as “only” a B.C. artist. He died of a cardiac arrest in Duncan–where he liked to eat lunch at the Dog House restaurant–at age 93 on January 5, 2007. His wife of many years, Rosabell ‘Fern’ Irvine Smith Hughes, had died in 1974. 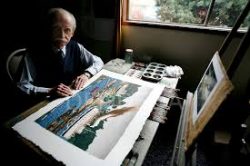