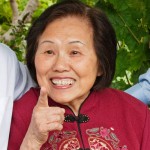 The winner of the BCHF Lieutenant Governor’s Histrocial Writing Medal for 2014 will be announced during the Banquet at the annual conference of the BC Historical Federation, held this year in Quesnel on May 21-23.
The finalists are:

Paul, Elsie – Written as I Remember It: Teachings (??ms ta?aw) from the Life of a Sliammon Elder – UBC Press

Sherwood, Jay – Surveying Southern British Columbia: A Photojournal of Frank Swannell, 1901-07 – Caitlin Press
Van den Berk, Bart – The History of Leechtown, Part I: The VIEE and the Discovery of Gold on the Sook and Leech Rivers – VandenBerk-Books
[Lily Chow in red tunic]