British Columbia by the Road presents a thought-provoking, new perspective on the history of B.C.’s interior. 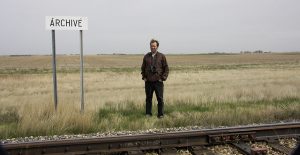 Ben Bradley surveys the "public pedagogy" of the road.

Three veins of history are the Hope-Princeton, the forgotten Big Bend Highway and the Fraser Canyon. Review by Dan Francis.

Bradley shows how Manning Park was groomed to appeal to the motoring public. Groves of wild Rhododendron, stands of majestic old-growth timber, and bluffs of mountain goat habitat were all identified as roadside attractions. Scenic lookouts were built and signs of industrial activity hidden. The Manning Park “wilderness” was in fact a carefully crafted “natural” landscape in which sights were manipulated to show B.C. at its best. As the “crown jewel of the park system,” writes Bradley, “few other provincial parks were as carefully and lavishly tended as Manning was” (p. 63). 2 Responses to “Highways to tell”