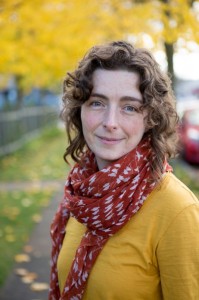 Bren Simmers’ book-length poem Hastings-Sunrise (Gibsons: Nightwood Editions $18.95) is a tribute to the neighbourhood of Vancouver in which she lived from 2010-2013. It reflects her attempts to find home in a city where she couldn’t afford to own one. Borrowing from phenology, she tracked seasonal and cultural changes from one spring to the next. “These observations allowed me to me to develop other markers of home,” she says, “the rhythms of street trees and Christmas lights, the people we pass everyday, and favourite neighbourhood routes.” She subsequently left Hastings-Sunrise in favour of the natural, wooded environment of the Squamish area. Bren Simmers has won an Arc Poetry Magazine Poem of the Year Award, she has been a finalist for The Malahat Review’s Long Poem Prize and she has been twice longlisted for the CBC Poetry Prize. Her work has been anthologized in Alive at the Center: Contemporary Poems from the Pacific Northwest (Ooligan, 2013).  Her first book was Night Gears (Hamilton: Wolsak and Wynn, 2010) .  978-0-88971-310-9