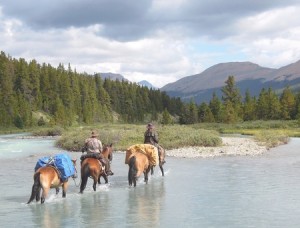 Tania Millen was born in Ottawa to an engineering father and a botanist mother. With an older sister and a younger brother, she says she became the attention-seeking middle child. Her first encounter with moving water was canoeing down the Red River in Winnipeg with her parents in 1974 as a four-year-old. The following year the family moved West Vancouver. She was raised with lots of outdoor activities; mountaineering; sailing; eating home-grown veggies; volunteering; and travelling. Her parents were organic gardeners and avid environmentalists, reducing the possibility that she would become the creator of GMOs for Monsanto. Millen caught the horse bug at nine years old and at twelve was getting paid to ride other people’s horses. As a teen, when she wasn’t horse riding, she was paragliding, climbing, pumping iron, skiing, building a house, living in England and Australia, completing a BSc in Environmental Science, developing an environmental career, getting trained by her dog, and writing. Her first whitewater experiences coincided with her move to Terrace in 1992, where she now lives. At 29, Tania bought a horse of her own and started training and selling diamonds-in-the-rough.

After learning to pack horses in 2010, Tania traded her jumping saddle for a western trail saddle and has since ridden over 3,000 km through western Canada’s wilderness. Her first book is Rockin’ Whitewater: A Guide to Paddling in Northwest British Columbia (Smithers: Creekstone Press $20). It’s a comprehensive guide to 47 whitewater runs around northern B.C. from the Skeena, Nass and Stikine to the Morice and Bulkley rivers; from Butze Rapids to the salmon-rich Babine and Kispiox rivers. It includes a description of the so-called Grand Canyon of the Stikine, a stretch of river run by less than 50 paddlers and considered by some as the “Everest of Kayaking.” Her favourite paddle is the scenic Terrace to Exstew River run on the Lower Skeena.