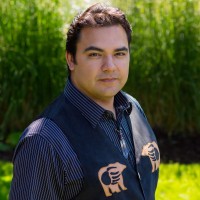 Frank Christopher Busch is a member of the Nisichawayasihk Cree Nation and grew up in northern Manitoba. He has spent his professional life working with First Nations businesses, non-profits and governments at the band, regional tribal council, provincial, national and international levels. He lives in Westbank First Nation in the Okangan region of B.C. His first novel, Grey Eyes (Roseway $20.95), is a fantastical exploration of First Nations culture that centres upon the ancient stewards of the land, the Grey Eyes, who use their magic to maintain harmony and keep evil at bay. “With only one elderly Grey-Eye left in the village of the Nehiyawak, the birth of a new Grey-Eyed boy promises a renewed line of defence against their only foe: the menacing Red-Eyes, whose name is rarely spoken but whose presence is ever felt. While the birth of the Grey-Eyed boy offers the clan much-needed protection, it also initiates a struggle for power that threatens to rip the clan apart, leaving them defenceless against the their sworn ememy. The responsibility of restoring balance and harmony, the only way to keep the Nehiyawak safe, is thrust upon a boy’s slender shoulders. What powers will he have, and can he protect the clan from the evil of the Red Eyes?” 9781552666777