Getting it down Pat 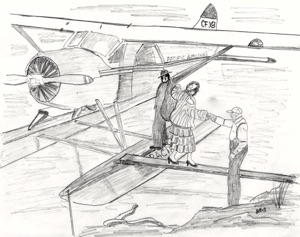 In early 1996, as a volunteer for the Sunshine Coast White Cane Society, Ben Nuttall-Smith met Ayliffe “Pat” Carey, a blind ex-bush pilot. When Carey learned he wrote wrote stories for the local newspaper, he asked Nuttall-Smith to help him write his life story. Nuttall-Smith commenced weekly visits to the Carey trailer home where Pat and his wife Jean re-told stories of his life as a Fraser Valley pioneer and also his adventures as a bush pilot. “His attention to detail and his memory for names were amazing,” says Nuttall-Smith.

Pat Carey died on October 9th, 1999, aged 96. Following his memorial service, Pat’s widow Jean asked Nuttall-Smith to continue the biographical work. When an obstinate relative refused to cooperate with the sharing of information about photographs, the manuscript lay dormant for several years while Nuttall-Smith wrote other books. Eventually Nuttall-Smith decided the story was too good to go untold, so he illustrated Flying with White Eagle ($14.95) himself with 28 pencil sketches. He formulated the text in Pat Carey’s voice, as if Carey was narrating an autobiography, adding some historical and explanatory notes. “This is Pat Carey’s story,” says Nuttall-Smith. “I’m just passing it on.” 978-0-9865938-9-5