From the lands of Xesdu’wäxw 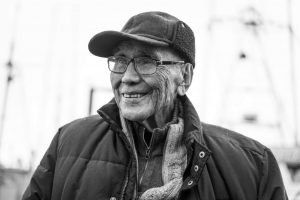 Born in 1931 in the Kitlope, Cecil Paul, also known by his Xenaksiala name, Wa’xaid, is one of the last fluent speakers of his people’s language. At age ten he was placed in a residential school run by the United Church of Canada at Port Alberni where he was abused. After three decades of prolonged alcohol abuse, he returned to the Kitlope where his healing journey began. He has worked tirelessly to protect the Kitlope, described as the largest intact temperate rainforest watershed in the world. In his late 80s, he resides on his ancestors’ traditional territory. He is the co-author of Stories from the Magic Canoe of Wa’xaid (Rocky Mountain Books $30) as told to Briony Penn, who is also releasing her own 400-page book, A Year on the Wild Side: A West Coast Naturalist’s Almanac (Touchwood $26). “My name is Wa’xaid,” he says, “given to me by my people. ‘Wa’ is ‘the river’, ‘Xaid’ is ‘good’ – good river. Sometimes the river is not good. I am a Xenaksiala, I am from the Killer Whale Clan. I would like to walk with you in Xenaksiala lands. Where I will take you is the place of my birth. They call it the Kitlope. It is called Xesdu’wäxw (Huschduwaschdu) for ‘blue, milky, glacial water’. Our destination is what I would like to talk about, and a boat—I call it my magic canoe. It is a magical canoe because there is room for everyone who wants to come into it to paddle together. The currents against it are very strong but I believe we can reach that destination and this is the reason for our survival.” Photo:  Callum Gunn