From sunny ways to better days

Currently U.S. politics makes Canada look like Nirvana, but that doesn't mean our system does not require ongoing tinkering and maintenance. 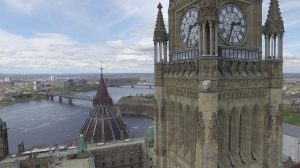 The Peace Tower on the Ottawa River. The bell tolls for thee.

Co-editor Burnaby South MP Kennedy Stewart and Saanich-Gulf Island MP Elizabeth May are part of a non-partisan look at reforming Canada’s democracy in Turning Parliament Inside Out, reviewed by Hamish Telford. 2 Responses to “From sunny ways to better days”