Thomas Fuller and John Olmsted get their due. 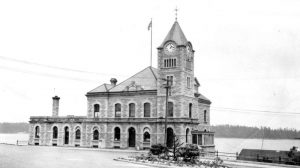 In the 19th century, Thomas Fuller designed the post offices in Victoria and Nanaimo (above). Among other buildings, Fuller (1823-1898) designed the post offices in Victoria and Nanaimo, while the landscape architect John Olmsted (1852–1920) is best known for his design of Uplands in the Victoria suburb of Oak Bay. *
Larry McCann’s striking book on Uplands, by contrast, features graphic design, 80-pound paper, and a hardcover binding that produce the look and feel of a limited edition. A colophon identifies the designer, artist (of numerous pencil drawings), typefaces, and printer.