From Bowen Island to Marpole 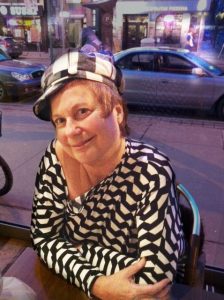 Bowen Island poet Jude Neale began her first week as writer in residence at the Historic Joy Kogawa House in Vancouver’s Marpole neighbourhood by examining everything in the historic residence and writing haiku about what inspired her.

One of the first things that caught Neale’s eye was the flowering rhododendron beside the Kogawa house’s front step, that resulted in the poem “Pink rhododendron”:

Pink rhododendron
Blossoms sprinkled on the path
Leading to the door

Neale plans her collection of haiku poems will be organized into sections according to rooms in the house. Front, back, and laneway gardens on the modest property will also be considered. Photographs will illustrate each poem.

Neale’s aim is to have 100 poems by the end of her two-week residency, enough to publish a new book to be titled Inside the Pearl. 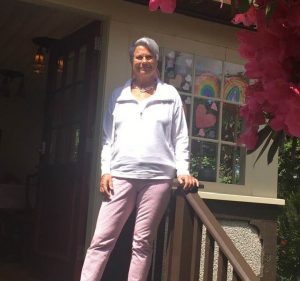 Neale will also be researching Joy Kogawa’s early life and family home in order to establish an archive for the house.

Since 2009, the Historic Joy Kogawa House Society has hosted writers to live and work in the house where Joy Kogawa lived with her family until it was confiscated under the War Measures Act during World War II. It was later purchased by the Land Conservancy of B.C. in May of 2006 to prevent it from being demolished and then purchased by the City of Vancouver in 2016. While in residence, the writer progresses a full-length writing project and engages with the community via a program of writing-focused activities.

Jude Neale is a teacher, classical singer and poet whose debut book of poetry, Only the Fallen Can See (Leaf Press 2011), chronicles the journey of a mother struggling with bipolar illness. Her second book of poems, A Quiet Coming of Light: A Poetic Memoir (Leaf Press 2014) was nominated for a Pat Lowther Award.

One of the poems from her collection, Splendid in its Silence (SPM Publications 2017) was chosen by Britain’s Poet Laureate to accompany other poets’ works around the Channel Islands on public transit for a year. That same year, Neale was a featured reader at the Guernsey International Literary festival.

In 2001, Neale was nominated for a Prime Minister’s Award for Excellence in Teaching award. She graduated from the Humber School of Writing in Ontario in 2006 where she was mentored by poet Elisabeth Harvor.

Her last four poetry collections have been published by Ekstasis Editions.

We Sing Ourselves Back (Ekstasis 2019)