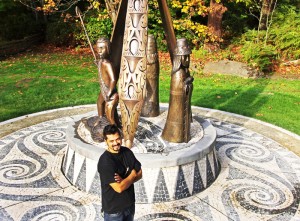 Before Edward Stamp built a sawmill at Brockton Point around 1865, the promontory north of Coal Harbour was utilized as a burial site for early white settlers. It was named for Francis Brockton, engineeer of Captain Henry Richards’ HMS Plumper, after Brockton reputedly found a vein of coal at Coal Harbour in 1859. In 2015, it became home to one of the first pieces of Coast Salish art to be installed in Stanley Park, a 14-foot (4.2 metre) bronze-cast cedar sculpture, the subject of Suzanne Fournier’s Shore to Shore: The Art of Ts’uts’umutl Luke Marston (Harbour). “Along with Susan Point’s house portals and the Squamish Albert Yelton Pole,” said Fournier in 2015, “Shore to Shore establishes the rightful place of the Coast Salish in Stanley Park, at a site which 9.5 million people visit each year, but one which has until recently displayed only northern-style totem poles.” In Shore to Shore: The Art of Ts’uts’umutl Luke Marston, Suzanne Fournier profiles First Nations artist, Luke Marston, who created the sculpture at Brockton Point, and describes his journey to Portugal to research the work. The title “Shore to Shore” references Marston’s great-great-grandfather, Portuguese Joe Silvey, who sailed from the Azores Islands of Portugal to the West Coast of Canada in the mid-1800s.

Lucy raised eleven children to adulthood and her second eldest child, Elizabeth, was the first registered birth of the child of white/aboriginal parents.

The sculpture rests on a 2.5-foothigh base of black-and-white Portuguese mosaic stone. It also includes images of seine nets, whaling harpoons and Pacific coast salmon.

According to Fournier, the three First Nations who claim the park as unceded Coast Salish territory [Musqueam, Squamish and Tsleil-Waututh] were consulted closely throughout the project. Fournier accompanied Marston to his ancestors’ village on the Azores where Portuguese Joe Silvey was raised to be a whaler. A celebratory feast was held at the Musqueam Cultural Centre on the same day as the formal unveiling on April 25, 2015. The (approximately) $1 million project had to be funded by the community. It received one federal Legacies grant, which had to be matched. The Portuguese-Canadian community raised more than $300,000, and finally, just months from the unveiling date, Vancouver city council, Parks Board and the three First Nations contributed some financial support.

Hence this statue that celebrates the amalgamations of racial backgrounds symbolizes both the progressive devolution of “British” Columbia and its evolution as a self-aware multi-racial construct.

“History is usually written by the winners,” Jean Barman wrote in 2003. “Their lives comprise the archival collections, and historically these have been white men enjoying political and economic privilege. So long as we rely on the materials at hand, we keep telling the same old stories.”

Suzanne Fournier is a journalist who has been working and writing about First Nations topics for over forty years. She divides her time between Galiano Island and Vancouver. Ernie Crey and Suzanne Fournier examined the devastating impact of large scale efforts to assimilate Indians (as they were called) into mainstream Canadian society in Stolen from our Embrace: The Abduction of First Nations Children and the Rebuilding of Aboriginal Communities (D&M 1997 $29.95) for which they received the Hubert Evans Non-Fiction Prize 1998.

Review of the author’s work by <i>BC Studies</i>:
<a href=” http://ojs.library.ubc.ca/index.php/bcstudies/article/view/1521/1564″>Stolen from Our Embrace: The Abduction of First Nations Children and the Restoration of Aboriginal Communities</a>