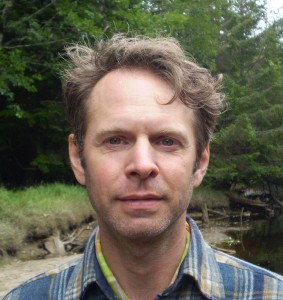 Derrick Denholm received an award for emerging artist in 1994 and vanished into the rain forests of northern and coastal BC for the next fifteen years. An award-winning visual artist and musician, Denholm’s work reflects his concern for the interconnection of education and communication in social and environmental justice. Dead Salmon Dialectics (Caitlin Press $16.95), winner of the Barry McKinnon Chapbook Award for 2010, follows the trials of a young biologist at work in the wild estuaries of one of the rainiest places on earth. Denholm’s poetry, filled with swirls of phosphorescent algae and night-fishing bears, is described by promotional material as, “an interdisciplinary experiment for the senses and the synapses.” According to publicity materials for his new Ground-Truthing: Reimagining the Indigenous Rainforests of BC’s North Coast  (Caitlin $16.95), Denholm combines his 25 years of experience working in BC’s forests with his artistic perspective to “guide us through the tangle of social, ecological and economic slash piles that dominate BC’s North Coast. Scientists, poets, loggers, activists, mushroom hunters–Ground-Truthing explores this diverse terrain of communities and cultures in its search for an answer to one of our most urgent questions: How can we work productively and participate ethically in a life that maintains respect for the wild, not only in the rain-soaked forests of BC’s North Coast, but everywhere?” Denholme earned his BA and MA at the University of Northern BC. Also a musician and artist, his work has appeared in Canadian Literature, Drunken Boat, the Goose, ::stonestone:: and the Capilano Review. Denholm lives in Northern BC.978-1-927575-70-3