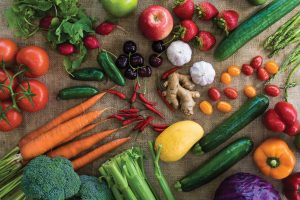 We are what we eat, and who we eat with; and reviewer Alan Belk is appreciative of that.

In a country of diversity, we are challenged to taste, absorb and digest 252 contributions, including one that requires a large V8-engined automobile capable of towing a trailer.

Sustenance: Writers from BC and Beyond on the Subject of Food 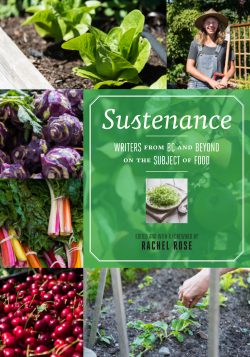 It would be easy to review Sustenance as a representative of the literary genre Coffee Table: a beautifully illustrated collection of short pieces of prose and brief poems linked by the broad topic of food. I could refer to the 252 contributions as trifles, samplers, or amuse-bouches and perhaps sustain a culinary metaphor or two by pretending that I were reviewing a restaurant (spoiler alert: it would get ☆☆☆☆☆). But that would do the book an injustice, for although food is the focus of most pieces, Sustenance is not about food.

Camus asked what sustained Sisyphus, who spent his days pushing a boulder up a hill only to watch it roll back down to the bottom as he reached the summit.

At a basic level food sustained Sisyphus as it sustains us all. Without food, we die. But there is more to sustenance than subsistence: to simply scarfing down calories and vitamins and ensuring you hit on each of the famous four food groups (or five if you live in the United States), as you push that boulder up and down your hill. 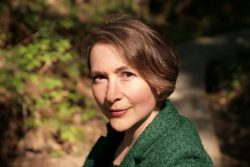 I read a contribution or two, or three or four, and then sat back and wondered at the range and variety of what people eat and how they get it and prepare it, and how it affects them. Sometimes I thought, “That looks like an interesting recipe; maybe I’ll try that someday.” 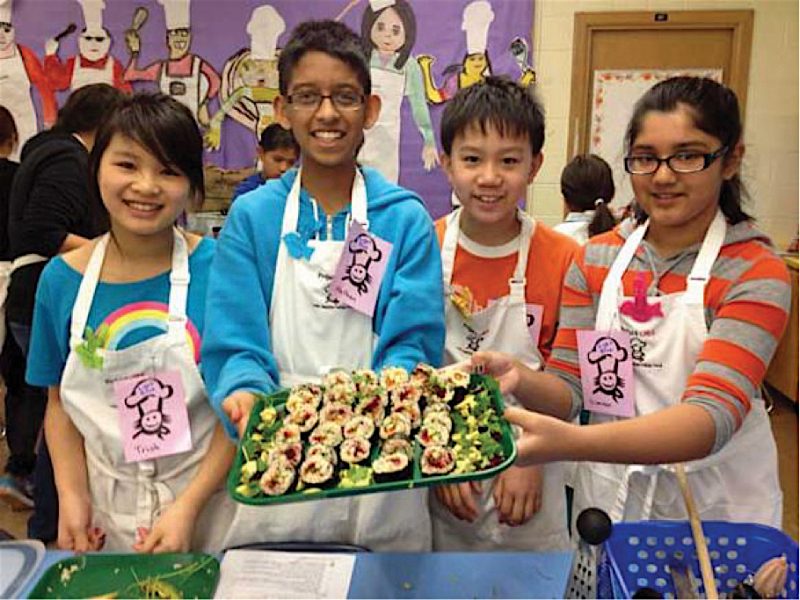 Yes, there are recipes in Sustenance, but not very many. One requires a large V8-engined automobile capable of towing a trailer, lots of aluminum foil, steak that slow-cooks as you travel, and a well-organized family. But if you take this to be a book about food then you risk turning it into a coffee table book. Coffee stimulates but does not sustain. Sustenance deserves and demands more.

The contributions are brief, some extremely so. A page or less, or even six lines. How can six lines be important? Here is “hungry in Tofino,” a poem by kjmunro:

Food is grown, harvested, foraged, scavenged, hunted, killed, stolen, caught, bought, prepared, and cooked. Sometimes we prepare our sustenance on our own and for ourselves, but we also ensure that others have it: family, friends, visitors, immigrants, homeless people, strangers, customers, prisoners. 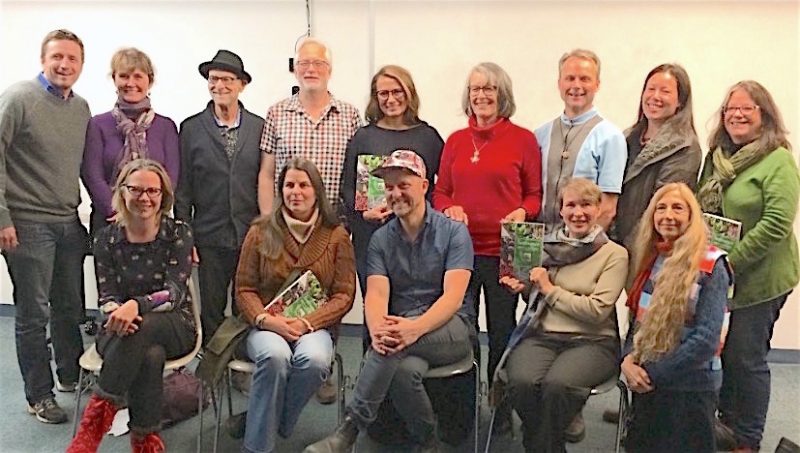 When it comes to food preparation, we generally do the best job we can. We try to make something that looks and tastes good. A dish of food must look appetizing, not three shades of beige. Those who cook are taught by their parents, grandparents, friends, strangers, culinary schools or chefs, or internet videos. Unless we are airborne, we often now take photos of dishes because their presentation is pleasing (just google images for “food”). By virtue of wanting and trying to do the best we can when we prepare food, we become better people.

We need to make sense out of things, and Sustenance challenges the reader to taste, absorb, and digest its 252 diverse contributions. We make sense of the world by creating our own narrative, one that unifies diversity. But how can I link a mother who roasts beef on the engine block of the family sedan on a camping trip with a grandmother, a survivor of Auschwitz, who bartered bread for a good-looking tattoo, or a woman whose parents were harassed and had their salmon confiscated by the RCMP? 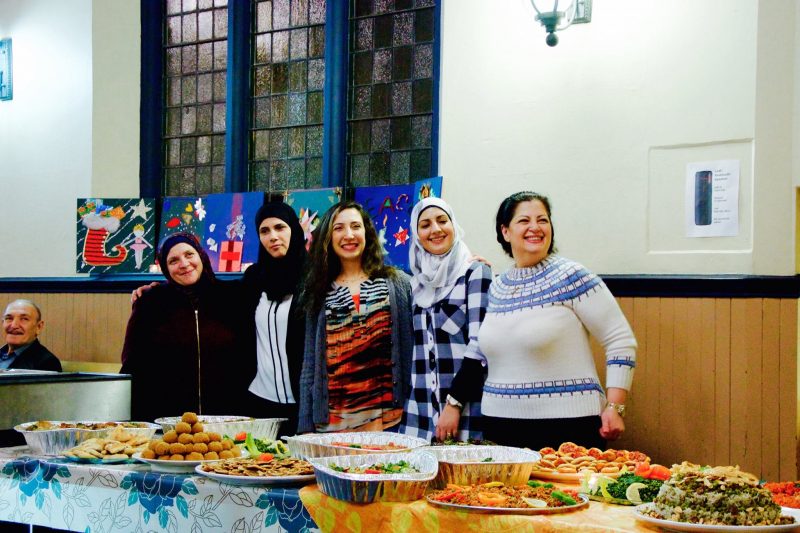 The contributions are diverse and full of surprises. There really is a chocolate factory! Sustenance contains a poem titled “Blackberries” in which blackberries is replaced by fat ladies wherever it appears.

What the contributions have in common is beauty. Sustenance is a beautiful book full of a pleasing variety and unexpected surprises. Pictures, typography, layout, paper, colours, and content blend together to create an extremely attractive whole. The book’s beauty sustains us because beauty improves us spiritually.

Sustenance is also fun to read. It is upbeat, celebratory, amusing, uplifting, and joyful. The contributions are short, the contributors are generous. They share their work as gifts to the reader. As hosts, they share their tables with us.

The contributors are equally diverse: by age, gender, experience, heritage, and origin. The book contains singly- and jointly-authored contributions by grade school students. Like them, Sustenance is directed towards the future.

This is Canada, a country of diversity where we are legislated to be multicultural; but legislation does not determine community. That we have to work at by, for example, volunteering in a medical centre, becoming friendly with our neighbours, getting to know our sources of community food, mingling with local grocery and restaurant workers, staff, and guests.

And in B.C., we also recognize that we are visitors here. Vancouver, for example, is on the unceded traditional territory of the Musqueam, Squamish, and Tsleil-Waututh First Nations. When we grow food on our land, we tacitly share and acknowledge the source of our own sustenance. We have a communal responsibility for its stewardship.

Sustenance shows how food engenders community. Food activities are above all communal activities. The book embraces the idea that how we eat today must be done in a way that ensures that we can also eat tomorrow. It requires community engagement and activity.

I moderate a monthly philosophers’ café – founded twenty years ago by Yosef Wosk, whose name is also attached The Ormsby Review — in which we explore, through conversation, what it is to be human and what makes life worthwhile. Time after time our conversations include the idea that a valuable part of our lives is interaction with other people. Other people enrich our lives; they engage, teach, amuse, inform, and stimulate us; they make us look at ourselves, make us grow, make us healthy. They sustain us. Sort of like food. 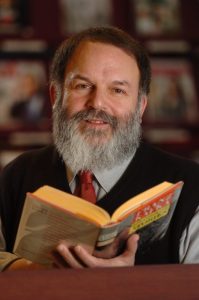 On pages 98-102, Wosk has poetic-prose contribution called Oroboros on a mythological and comparative religions theme. He writes, “The universe is a single cannibalistic organism, a self-sustaining unbroken circle; autonomous, terrifying and utterly unstoppable. Herbivore, carnivore, omnivore, orovore—the serpent consuming its own tail in an eternal vortex of renewal, its own creation and self-destruction, the endless knot, eternal return, historic recurrence.”

Sustenance shows us how our survival, growth, and development into better people is fostered by the interactions we have with others through food. It also shows how food builds community by drawing us across cultural and generational boundaries that might otherwise be barriers to our individual growth and betterment.

This worthwhile book shows us, in interesting and original poetry and prose, how to sustain others as we sustain ourselves. 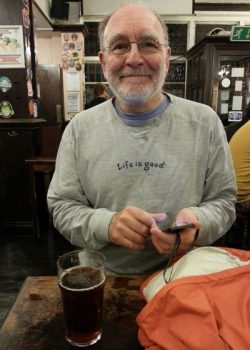 Originally from the south of England, Alan Belk drove a school bus before teaching ethics, critical thinking, existentialism, and all sorts of philosophy to undergraduate students at the University of Guelph. He migrated to Vancouver eighteen months ago and sustains himself by doing philosophy for SFU’s Continuing Studies program.