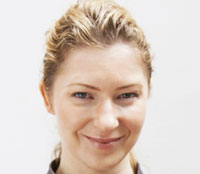 The festivities at GEEKCon will include board games, PokemonGo, a cosplay competition, video games, Magic the Gathering and panel discussions. All events are free and open to all ages.

A highlight of GEEKCon will be an author event with Kristi Charish, from Vancouver, and Nanaimo’s Cynthea Masson, who will both talk about life as Fantasy writers.

Kristi Charish’s (pictured at right) latest book is the debut of a new urban fantasy series called The Voodoo Killings: A Kincaid Strange Novel (Vintage Canada, $24). The story revolves around Kincaid Strange, a twenty-seven year old voodoo practitioner living in rain-soaked Seattle, and barely making a living running seances for university students with more money than brains who are desperate for guitar lessons with the ghost of a Seattle grunge rocker–who happens to be Kincaid’s on-again, off-again roommate. Then a stray zombie turns up outside her neighbourhood bar. Kincaid soon realizes this zombie is tied to a spate of murders. Kristi Charish stories featuring strong, savvy female protagonists, pop culture, and the occasional RPG fantasy game thrown in the mix. She co-hosts a biweekly podcast called The Adventures in Sci-Fi Publishing, where up-and-coming and established authors in Sci-Fi are interviewed. She’s also a scientist with a BSc and MSc from Simon Fraser University in Molecular Biology and Biochemistry and a PhD in Zoology from the University of British Columbia.

Cynthea Masson’s The Alchemists’ Council (ECW $16.95), is the debut of a fantasy trilogy, where the power of words can change the fate of all dimensions. Our heroine Jaden, of the Alchemists’ Council, is trained to maintain the elemental balance of the world, while fending off interference by the malevolent Rebel Branch. Bees are disappearing from the pages of the ancient manuscripts in Council dimension and from the outside world, threatening its very existence. Jaden navigates alchemy’s complexities, but the more she learns, the more she begins to question Council practices. Erasure — a procedure designed not only to remove individuals from Council dimension but also from the memories of other alchemists — troubles Jaden, and she uses her ingenuity to remember one of the erased people. Faced with an ethical dilemma involving the free will of all humanity, Jaden must decide whether or not she can save the worlds. Cynthea Masson is a professor in the English department at Vancouver Island University. After completing a Ph.D. in English with a focus on medieval mysticism, she undertook a postdoctoral fellowship involving work with medieval alchemical manuscripts at the British Library.

11am: Magic the Gathering–Modern Event (arrive 30 minutes ahead of time to register).
11:00-3:00: Minecraft Tournament
11:00-12:00: Medieval Chaos will be giving a demo on the basics of combat used within our live action roleplaying games as well as demonstrating ability and spell effects with a pit of rules, different armor types and basic costuming as well as showcasing different NPC’s (Large Meeting Room).
11:00-1:00: Little Tales Princess Parties
11:00-2:00: Carlos and Carlitta Clowning
12:45-1:45: Kristi Charish and Cynthea Masson talk and read from and about their latest Fantasy Books followed by a Q&A and a book signing (Large Meeting Room).
1:00-4:00: 501st Legion
2:00-3:00: Cosplay Panel (Large Meeting Room)
3:15-3:30: Children’s Cosplay Competition
3:30-4:00: Cosplay Competition

GEEKCon organizer Jonathon Bigelow, the Customer Services Librarian at Harbourfront Library is also in the process of arranging an Indi-Author Day event at the library on Oct 8th.

As well, Bigelow is planning a Camp NaNoWriMo event through November as a partnership with the Federation of BC Writers and the Young Writers Program. The NaNoWriMo event is a challenge to write a novel in one month, with guided help through the whole process, including pep talks, encouragement, and a literary party at the end. Harbourfront Library has an espresso book machine if participants wish to print a copy of their book.