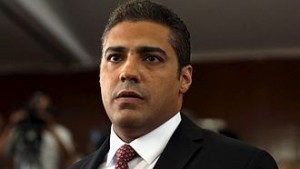 During Freedom to Read Week in Canada, the Eygytian-born Canadian journalist Mohamed Fahmy was accorded the 2016 Freedom to Read Award presented annually by The Writers Union of Canada [TWUC] to recognize advocacy on behalf of free expression. Past recipients include John Ralston Saul, Patsy Aldana, Lawrence Hill and Ron Brown.

Fahmy was imprisoned in Egypt and sentenced to long-term incarceration for his work in covering the Arab Spring. Since his release, he has lived in Vancouver where he launched the Fahmy Foundation with his wife and fellow advocate Marwa Omara.

Born in Egypt on April 27, 1974, Fahmy reported extensively in the Middle East and North Africa mostly for CNN. His coverage of the Iraq War in 2003 resulted in the book, Baghdad Bound. He has worked for two years for Dubai Television and he completed a one-year mission as a protection delegate for the International Committee of the Red Cross in Lebanon in 2007. He received a Peabody award in 2007 for CNN’s he network’s coverage of the Arab Spring, then he received the Tom Renner investigative reporting award for producing the CNN Freedom Project documentary series “Death in the Desert”. Fahmy subsequently co-authored Egyptian Freedom Story. In September of 2013 he was made Al Jazeera English Egypt Bureau Chief. In December of that year he was arrested him with colleagues Peter Greste and Baher Ghorab, accused of conspiring with a terrorist group and fabricating news to portray Egypt in a state of civil war.

In May of 2014, when he appeared in court, he was simultaneously accorded the Canadian Commission World Press Freedom Award and a certificate from the UNESCO on World Press Freedom Day. In June he was sentenced to seven years in a maximum-security prison. There was an international outcry, including severe condemnation of the farcical trial by US Secretary of State John Kerry.