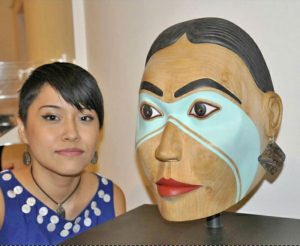 Now a Victoria exhibit, Ellen Neel: The First Woman Totem Pole Carver, has finally accorded some of the attention she has long deserved.

An exhibit at Legacy Gallery, Victoria, BC Megan Smetzer, who visited the exhibit for The Ormsby Review, assesses the belated legacy of Ka’kasolas, Ellen May Neel (1916-1966), the Kwakwaka’wakw artist who became the first woman carver in B.C. – Ed. *
Megan A. Smetzer is an independent art historian based in Vancouver. She teaches, publishes, and lectures primarily on historical and contemporary Northwest Coast Indigenous art, focusing on the cultural expressions of women. She is currently co-writing an essay on this topic for an exhibition at the Minneapolis Institute of Arts on Native American Women Artists. She is also working on her book entitled Painful Beauty: Tlingit Women, Beadwork and the Art of Resilience. In addition, she is the project manager for Border Free Bees, a SSHRC development grant that uses public art and ecology to bring attention to the plight of wild pollinators and empower individuals and communities to engage in solutions to reverse habitat loss.