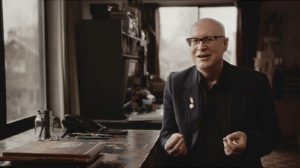 David Lester at his home office/studio being interviewed by the CBC.

“I didn’t want the drawing sequence [of June 21, 1919, known as ‘bloody Sunday’] to be entertaining,” Lester says. “I didn’t want people to enjoy it. I wanted to make something to counter the complacency with which we observe violence in popular culture.” 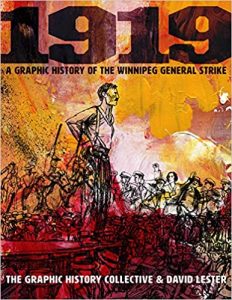 David Lester’s latest book 1919: A Graphic History of the Winnipeg Strike (Between the Lines $19.95) co-created with the Graphic History Collective, contains graphically violent scenes from Canada’s infamous general strike that occurred in May and June of 1919 in the City of Winnipeg.

During the event, when over 30,000 workers decided to actively demand better working conditions, higher wages and the right to collective bargaining, one day in particular is etched in history: June 21, 1919.

The workers were demonstrating peacefully when the police and vigilantes (backed by state officials and Winnipeg’s business elite) attacked them. It became so bloody that the strike ended a few days later.

1919 has been praised for capturing the raw intensity of class struggle and the book’s ability to convey lessons to new generations for organizing and maintaining solidarity.

The CBC has now produced a video about David Lester’s illustration methods and philosophies.

“How to depict the violence?” Lester asks.

“I didn’t want the drawing sequence [of June 21, 1919] to be entertaining. I didn’t want people to enjoy it. I wanted to make something to counter the complacency with which we observe violence in popular culture.”

Lester decided to illustrate the story as if he was a war artist.

“I drew feverishly as the sound of horse hooves got closer and the movement was all around,” he says. “I wanted the reader to hold in their hands the tactile quality of the grittiness of the streets. In order to do that, the drawings are very rough, overlaid as if on top of each other and to create a sense of chaos.”

Lester also developed unique methods with unusual tools to get the look he was after. “I used a toothbrush, which I dipped into water and then ground into some paint. Then I took a knife and, as I stand over the drawings, I dragged the knife over the [toothbrush] bristles and it caused the paint to spray all over the place.

“It was something I couldn’t particularly control and that’s what I wanted to do in order to reflect the messiness and dynamic of this terrible tragic day in labour history.”

With each graphic novel project, Lester alters his style to some degree. “I get out of my comfort zone,” he says. “There isn’t just one style of drawing that I use in order to tell a story. If it’s a radical subject I’m dealing with, I want to take a radical approach to drawing.” 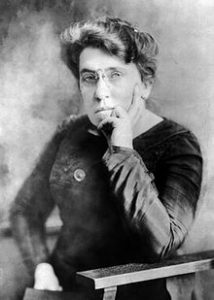 He has two new book projects underway including a story about the revolutionary Emma Goldman (1869-1940), an anarchist activist and writer who played a key role in the development of anarchy in the first half of the 20th century.

The book covers the last year of Goldman’s life when she lived in Toronto. “My interest in it, is how did she maintain being an activist for 50 years despite the attacks from members of the public and harassment from the police? She was arrested [in the United States], put on trial, imprisoned, deported and exiled across Europe and finally Canada.”

Lester wonders how, in the face of such push-back and resistance, Goldman maintained her ideals knowing that she would probably never live to see them realized.

“I find that a profound story right there.”

To do the drawings of Goldman, Lester created a clay model of the activist’s head complete with reading glasses.

“I can draw her from any angle,” he says as he rotates the clay head. He also uses a flashlight to shine light from different angles on the model. “That way, I can heighten the level of dark and light on her face. It gives me a lot of reference in terms of how to draw her face.”

Lester also made a scale model of the Toronto house where Goldman lived. “Again, I can control how shadows fall, using a flashlight, and how to depict characters in a room.”

“I like film noir a lot and this is where these influences come from.”

Ultimately, Lester says he is inspired by larger forces at work in society today.

“We see a move towards authoritarianism today – of the ‘great leader’ determining our existence. These books are fighting back against that; they are about solidarity, about collective action. They’re about ordinary people getting together and making social change and demanding social justice.

“Ordinary people should have power.”