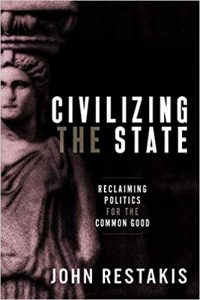 In his first book Humanizing the Economy (New Society, 2010), former executive director of the BC Co-operative Association, John Restakis showed how co-operative models for economic and social development can create a more equitable, just and humane future.

In his second book, Civilizing the State: Reclaiming Politics for the Common Good (New Society $19.99), due out in November, Restakis chronicles the history of the liberal state from an enabler of capitalism to protector of citizen welfare, and recently to its hollowing out and capture by corporate and elite interests.

Restakis argues that the liberal state is currently unfit to deal with contemporary crises of inequality, injustice and ecological collapse. He explores alternatives such as citizen-powered endeavours and experiments in co-operation, deep democracy, solidarity economics and ‘commoning’ from Spain, India, the global peasant movement, and the emerging stateless democracy of Rojava rising from the wreckage of the Syrian civil war.

Finally, Restakis looks at the opportunity to re-imagine the state as a ‘partner state’ that promotes equity, economic democracy and human thriving — a much more sovereign civil society. 9780865719439