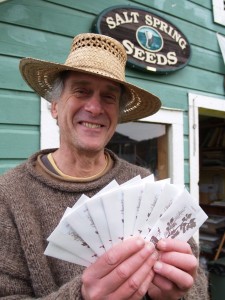 DAN IS BACK, AND HE NEVER WENT AWAY

Dan Jason has enjoyed gardening since childhood and he remains committed to empowering people to grow their own organic food and save their own seeds.

Born in Montreal on July 22, 1946, the agriculturalist and pioneering, back-to-land author is the subject of a 75-minute documentary by Jocelyn Demers called Gardens of Destiny.

Articles by and about Jason have appeared in Jason has been interviewed and been published in a number of publications, including: The Georgia Straight, Canadian Organic Growers Magazine, Seeds of Diversity Canada Magazine, Mother Earth News, Global Public Media, and Salt Spring News.

In 1972, Intermedia Press published Jason’s landmark volume, Your Own Food: A Forager’s Guide (1972), as well as his little-known children’s book Once Upon A Time I Love You, illustrated by his daughter Zama.

For his second book to promote healthier eating, Talonbooks published Jason’s bestseller, Some Useful Wild Plants for Nourishment and Healing, co-authored by Nancy Jason and Tom Perry, in 1975.

In 1976 he moved to Salt Spring Island where he created the mail-order seed company Salt Spring Seeds in 1988.

Dan Jason and his wife Celeste continue to grow seeds for his company as well as much of the food that his family eats.

Dan Jason’s next project will be The Power of Pulses (Harbour 2016), envisioned as a do-it-yourself guide to growing and eating pulses, a versatile, nutritious and highly sustainable crop that includes beans, peas, chickpeas, lentils and favas.

Co-authored with the foodie-sisters team of Hilary Malone and Alison Malone Eathorne, the publication of The Power of Pulses in 2016 will coincide with the United Nations’ International Year of Pulses, devoted to promoting the nutritional and environmental benefits of pulses which are rich in fibre, high in vitamin B, and remarkably low on the glycemic index—helping to reduce the risk of diabetes, heart disease and other chronic illness. Pulses are gluten-free and ideal for grind-your-own flour for non-gluten breads and baking.

The trio of authors will share more than forty vegetarian recipes such as Black Bean Brownies with Espresso Ganache; Broad Bean Succotash with Fresh Ricotta & Poached Eggs on Toast; and Crispy Chickpea Power Bowl with Kale, Quinoa & Dukkah Crunch. According to publicity materials, pulses can substitute for meat or tofu as a source of protein.

“While the ecological and health benefits of cutting down on meat consumption are widely known, not all meat-replacements are created equal. Soy products have long been a staple of vegetarian diets, but soybeans are often grown in pesticide-heavy monocultures, processed in factories and shipped long distances. By contrast, pulses are easy on the environment: versatile in their unprocessed state, needing no refrigeration and little packaging, and many are a snap to grow organically, even for new gardeners. In addition to being easy to grow at home, millions of tonnes of pulses are commercially harvested across North America, making them an ideal daily food for locavores.”

Dan Jason has developed his own Black Jet soybean variety and now specializes in seeds for high-protein plants. He has also been a director of Canada’s Heritage Seed Program, a national network of organic growers dedicated to preserving heirloom seeds, and he has written several other books. His Greening the Garden is a guide to sustainable organic growing and an empowering challenge to the corporate control of food production and gardening.

Some Useful Wild Plants for Nourishment and Healing (Talonbooks 1975), co-authored by Nancy Jason and Tom Perry

Saving Seeds as if Our Lives Depended on It.