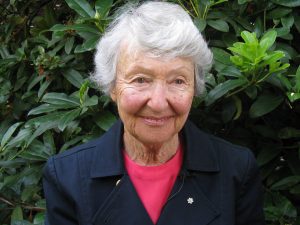 She became one of the most celebrated landscape architects of the 20th century, undertaking more than 500 projects, including over 70 playgrounds, co-writing two books and becoming the subject of two others.

Cornelia Oberlander was always ahead of her times.

Having fled Nazi Germany in 1938 at age 18, she attended Smith College where she lived in a room across the hall from Betty Friedan, who eventually wrote The Feminine Mystique, although Oberlander herself never self-identified as a feminist.

An astute commentary written by Robert Matas in 2014, reviewing a biography of Oberlander, notes, “Oberlander went on to Harvard in 1943. A year later, her mother, without Oberlander’s knowledge, asked the university to allow her to take a year off to work in an architectural office. Her mother thought her drafting skills were inadequate. Together, they decided she would take a year off. (The book does not tell us how that intervention affected her relationship with her mother.) Oberlander found a drafting job but was fired three months later and returned to complete her studies.”

After graduating in 1944, Oberlander became one of the first women allowed to earn a degree at the Harvard Graduate School of Design in 1947. There, at a class picnic, she met her future husband and fellow architect Peter H. Oberlander who became Canada’s first professor of Urban and Regional Planning. They would have three children.

The couple married in 1953 and moved to Vancouver where she immediately founded Cornelia Hahn Oberlander Landscape Architects. Inspired by her mother, Beate Hahn, a horticulturist who had operated a farm in New Hampshire during the war and wrote gardening books for children, Cornelia Oberlander specialized in landscape architecture while participating in the zeitgeist of a modern art movement in B.C. led by B.C. Binning and Ned Pratt.

Oberlander’s lifelong goal to synthesize architecture and landscape for a gesamtkunstwerk was evidenced in commissions undertaken over her 30-year collaboration with and for Arthur Erickson (Robson Square, Law Courts) that included her favourite work—the Yosef Wosk Reflecting Pond at the Museum of Anthropology that reflects the ever-changing sky. Around the pool are memorial and mortuary poles dating from 1951 to the present carved by Jim Hart (Haida), Chief Walter Harris (Gitxsan) and Mungo Martin (Kwakwaka’wakw). For a Macleans article by Hadani Ditmars in 2014, she recalled, “I got a call from Arthur to come to his office. He pulled out a huge swath of tracing paper and said, ‘Cornelia, how would you design the landscape here?’” She began work the next day by incorporating grasses native to Haida Gwaii.

“My work is about deep ecology,” Oberlander told Ditmars.

Far from unappreciated, Oberlander was one of four female architects profiled in the 2018 documentary film City Dreamers and she was highlighted in Jamie Bastedo’s Protectors of the Planet: Environmental Trailblazers from 7 to 97 (Red Deer Press, 2020). She’s the subject of two books, Kathy Stinson’s 96-page biography for young readers, Love Every Leaf: The Life of Landscape Architect Cornelia Hahn Oberlander (Tundra, 2008),and UBC professor Susan Herrington’s academic work, Cornelia Hahn Oberlander: Making the Modern Landscape (University of Virginia Press, 2013). Her own books are Trees in the City Habitat: A Series of Texts on All Aspects of Human Settlements (New York: Pergamon, 1977) co-authored with Ira Bruce Nadel and Lesley R. Bohm and Green Roof: A Design Guide and Review of Relevant Technologies (Public Works and Government Services Canada, 2002) with Elisabeth Whitelaw and Eva Matsuzaki.

Having visited Israel for an international congress of landscape architects in 1962, the couple commenced decades of philanthropic and educational pursuits in Israel including involvements with the Hebrew University of Jerusalem on Mount Scopus. These included a botanical garden in Ashkalon for settlers from North Africa and Georgia. As one of the founding members of Temple Sholom in Vancouver, she designed the synagogue’s garden as well as the biblical garden at King David High School with its plants reflecting the various species and geographic regions of the Land of Israel as described in the Torah.

From the outset of her career, designing public housing projects with Louis Kahn in Philadelphia to the close of her career designing the rooftop garden atop the Vancouver Public Library, through high status commissions for the National Gallery of Canada, the New York Times building courtyard in Manhattan and the Canadian Embassy in Berlin, as well as social serving jobs such as the Skeena Terrace social housing project in 1965, Overlander maintained a steadfast resolve that earned her the American Society of Landscape Architects medal in 2012, as well as the Order of British Columbia and the Order of Canada.

Elected to both the Canadian Society of Landscape Architects’ College of Fellows (in 1981) and the American Society of Landscape Architects’ Council of Fellows (in 1992), Cornelia Oberlander died one month shy of her 100th birthday in Vancouver on May 22, 2021. Two days after she died, she was posthumously accorded the Freedom of the City award from the City of Vancouver. “During Jewish Heritage Month this May,” said Vancouver Mayor Kennedy Stewart, “we honour her outstanding accomplishments in bringing world-class landscape design to Canada, and to Vancouver in particular. On behalf of council, I extend my deepest sympathies to her family and friends. May her memory be a blessing.” Her many creations around the city include the VanDusen Botanical Garden visitor centre, log benches on public beaches and Vancouver General Hospital’s burn unit garden.

“I dream of Green Cities with Green Buildings,” Oberlander said, upon receiving an honorary degree from SFU in 2005, “where rural and urban activities live in harmony.”