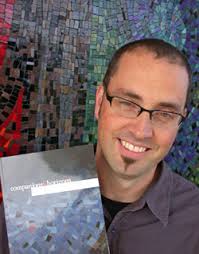 SFU teacher and Talonbooks author Stephen Collis is a spokesperson for a group of land defenders who have disrupted survey work to protect parts of Burnaby Mountain, on unceded Coast Salish territories, against the Kinder Morgan Trans Mountain pipeline.

Kinder Morgan has served the conservationists and/or obstructionists with a $5.6 million dollar lawsuit. A legal defence fund has been created to support the legal costs for Stephen Collis, Adam Gold, Mia Nissen and Lynne Quarmby who are defending their rights to protest in hearings at the Supreme Court of B.C. this month. $40,000 was raised in just three days. The link from his publisher is Help them raise legal defence funds “How, in a democracy, can someone be charged for occupying public land, and for speaking their mind freely?” says Collis, “Last I checked, Canada had a constitution. I believe I am allowed to speak freely about climate change, about our need to alter our course away from fossil fuels, and the need for a public movement against systemic threats to this planet. I do not believe corporations should be allowed to take this freedom away from me or anyone else.”

Stephen Collis teaches poetry, poetics, modernism and American literature at Simon Fraser University. His collection On the Material (2010) is described as a meditation on language, geography, socio-economics and the body. It received the Dorothy Livesay Poetry Prize in 2011.

As a descendant of Scottish coal miners who came to Vancouver Island in the late 1800s, poet Stephen Collis first wrote Mine (New Star, 2001), a reconstruction of the early history of the B.C. coal industry. It was followed by Anarchive (New Star, 2005), an investigation into the connection between anarchy and poetry, partially inspired by the Spanish Civil War.

Collis wandered backwards in time even further for The Commons (Talonbooks 2008), an anarchy-inspired exploration of how commonly-held lands were essentially privatized in the English countryside. Amid the peasant revolts that failed to prevent the enclosure of land in the name of private ownership, Collis includes cameo appearances from the mad poet John Clare and back-to-the-land philosopher Henry David Thoreau.

To the Barricades (Talon 2013) looks at the shifting strategies of revolt and protest in contemporary social justice campaigns such as the Occupy movement and Idle No More. It is described as a collection of social lyrics and serial explorations “to drive apathy from the field” and recover forgotten radical ideas.

Described as fiction in the tradition of Borges, Nabokov, and Bolaño, The Red Album (Book Thug 2013) in another work by Stephen Collis that examines historical authenticity and authority. “As the ghosts of social revolutions of the past are lifted from the soil in Catalonia, and a new revolution unfolds in South America,” the story is complicated by a growing maze of author/characters.