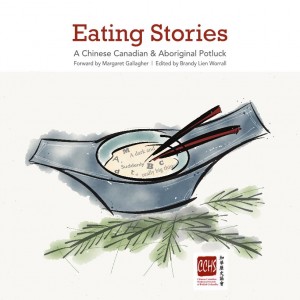 Blood and Sweat over the Railway Tracks examines the employment of thousands of Chinese labourers for construction of the CPR railway linking this country from coast to coast. The book looks at why the railway was built and how the Chinese labourers were recruited and transported from Guangdong to the various construction sites in British Columbia. Chow illustrates the difficult and dangerous tasks that the Chinese labourers had to perform and the challenges, hardship, struggle, and endurance of these workers. Despite the hard labour these men displayed an excellent work ethic, and were diligent and dependable people. Included are some poems and verses by a couple of Chinese labourers and their family members to show their anguish, anxiety, and longing.

Eating Stories: A Chinese Canadian & Aboriginal Potluck follows the success of the first workshop and the resulting book publication, Finding Memories, Tracing Routes, sponsored by the CCHSBC.  While the first workshop had eight participants, the second workshop nearly tripled in size as a second writing workshop with the theme of Food and Family.  Twenty-three participants of Chinese Canadian or Aboriginal backgrounds researched, discussed, and wrote their memories of family gatherings, home cooking, restaurant outings, and other stories. Ultimately, the book is about the power of food to bring families and communities together. In addition to the stories, there are 37 recipes and over 170 photographs and images. Historian Jean Barman wrote a new forward to the second edition.