Computer illiteracy can be beaten 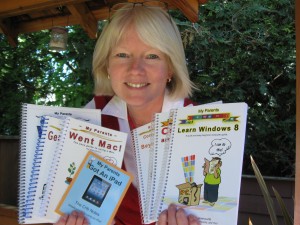 Not every author yearns to win The Giller or the Woodcock Award. Some strive for public eduction–to be useful. Louise Latremouille is the author of a series of computer instructional guides, some in large print, starting with My Parents First Computer and Internet Guide in 2004. The idea for the book arose from the notes she was making for her parents to help them learn how to use a computer. At the time, her father was battling lung cancer and so she wanted to relieve some of the stress in their lives. She wanted to make the process of learning basic computer skills–such as how to turn it on, how to use the mouse, how to use email–easy and fun. Their friends asked for copies. As of 2016, Latremouille claimed sales of 100,000 computer guides, enabling her to contribute over $37,000 to the fight against cancer and patient care in honour of her father. “Every time I write a book I think it will be the last book I write,” she says. “But then technology changes and I’m urged on to create another guide.” Learn Windows 10, Get the Edge is the 28th book Louise Latremouille has written and published for teaching computer basics. “Learn Windows 10 is the smallest of all my books and a little different format,” she says. “It’s almost like an old-style workbook, with an exercise to practice for everything you learn. I’ve found Windows 10 is by far the easiest system to teach and learn.” 978 0 0993700279 $12.49