In an imagined dystopian world, a dog and an intellectually disabled teen seek safety from a cruel, authoritarian regime. 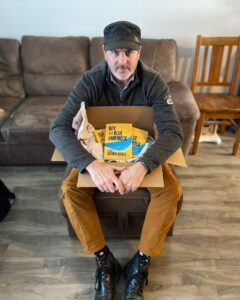 Darren Groth with a box of his newly-printed novels. Photo courtesy of the author.

Author Darren Groth, an advocate for neurodiversity in literature based the boy, Kasper and dog, Tao on his son and their failed service dog.

Tao, a failed service dog, is now the loyal pet to “Family”—composed of “Woman,” “Man,” “Girl,” and “Boy.” Tao, though, has never understood Boy’s place in the pack. It seems straightforward to Tao: Boy is a “soft, vulnerable breed” and thus should be the lowest member in the hierarchy. Yet, Family always grants Boy special privileges—prioritizing him—and Boy shows “no deference, no apology, no fear” to Tao’s attempt at dominance. Tao’s dismissal of Boy, however, must come to an end when the other members of the pack are slain—leaving Tao as Boy’s only protector in their newly dystopian world.

This is the set-up for Darren Groth’s speculative fiction title, Boy in the Blue Hammock (Nightwood Editions $22.95), and we learn that “Boy” is Kasper—an intellectually disabled fifteen-year-old boy with a limited ability to speak—now the last surviving (human) member of the family. Groth, an advocate for neurodiversity and intellectual disability representation in literature, based Kasper and Tao on his son and their own failed service dog. The novel follows the duo as they are forced to leave their devastated home—and for Kasper, forced to leave behind one of his greatest comforts, his blue hammock—in search of safety away from the “hounds,” the forces of the ruling regime. 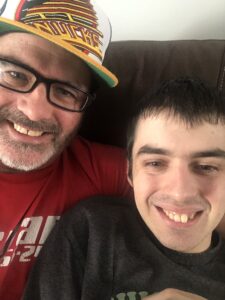 Darren Groth with his son.

Told partly from Tao’s limited point of view, Boy in the Blue Hammock reveals through the (curiously high) understanding of a dog the violence inflicted by the hounds on the family and their small Pacific Northwest town of Gilder. “The hounds pass by again, shadows darting like dragonflies,” writes Groth. “One slows, stops at the door. Tao can hear the breathing—deep, deliberate inhalations. Then the hoarse scrape of metal dragging across concrete. Tao smells body odour and tobacco. He senses joy borne by malevolence, a peach with maggots for a stone.”

Groth’s writing captures big themes, thoughts and emotions, and cruelties with a crisp and visceral quality. Many of the small, strung-together moments of Tao and Boy’s journey hold a poetic beauty: “Steps are the measure of time, each one bringing closer a midnight unknown. Walk awhile. Rest. Drift like lifeboats at sea. Duck beneath the swaying feet of a man hanged from a makeshift gallows. Lap at the last dribbles of a broken fire hydrant run dry.”

Neither Tao nor Kasper are able to communicate with, or understand what remains of the crumbling, cruel world in a way that will ease their path to survival. Their perspectives challenge the reader to consider other ways of communication, even those involving silence. But this does not stop the people that Tao and Kasper encounter on their journey from speaking to them. While Tao attempts to determine these strangers’ intentions because he cannot understand their words, their dialogue reveals their true character—and, importantly, how they view Kasper—to the reader. 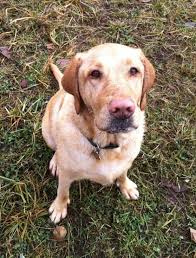 For a decade, a golden lab was part of the Groth family due to “incomplete training” with BC Guide Dogs.

Alongside the suspense of the duo’s arduous journey are interspersed flashbacks to the family’s past—all from the perspective of Kasper’s mother. Since the premise of the novel foretells the family’s impending end, these glimpses of the past flesh out Tao and Kasper’s present. They also reveal more of Groth’s dystopian worldbuilding and how the ongoing crises affected each family member’s daily life—especially Kasper’s. From seemingly small things, such as Kasper’s favourite crackers being out of stock for weeks, to not having electricity or batteries to play the song that would calm him down, disruptions to the family’s routines present a terrifying problem. Kasper’s parents fear what the future holds for their son when he can neither conform nor advocate for himself. “Kasper’s refusal to go quietly into the night was a blow struck for resistance,” writes Groth. “Protestors witnessing his meltdown would’ve applauded. A pyrrhic victory, of course. There weren’t any exceptions with this regime. Disability wasn’t a licence to rage. An IQ below seventy-five didn’t give you a free pass for dissent. After curfew, a meltdown was just another prompt for an anonymous call to the authorities. The irony—Kasper treated the same as everyone else.”

Against a background of mass inhumanity, Boy in the Blue Hammock is timely in its attention to disability and ableism, speaking to present realities and the increasingly complex lives of disabled people in a world that continually devalues them.

Despite his failure as a service dog and initial reluctance in accepting Boy’s place in the pack, Tao steps up to protect the most vulnerable member of his family. Their story emphasizes loss and loyalty, capability and trust, and pointedly imparts the need for disabled lives to be respected as inherently valuable. 9780889714267

Erin F. Chan (she/her) is a cyborg and graduate student in the Master of Publishing program at SFU and currently lives and works as a publishing assistant, copy editor, and designer on the unceded territories of the Musqueam, Squamish, and Tsleil-Waututh Nations.