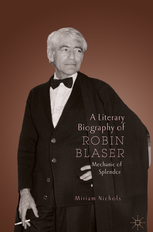 Miriam Nichols has provided a study of Robin Blaser’s life—recalling his mid-western conservative religious upbringing and his coming of age as a gay man in Berkeley, Boston, and San Francisco—with critical assessments of his major poems for A Literary Biography of Robin Blaser: Mechanic of Splendor (Palgrave Macmillan $39.99 U.S.), touted as the first major study illustrating Robin Blaser’s significance to North American poetry. A fixture at the English department of Simon Fraser University for twenty years, Blaser (1925–2009) drew upon his participation in the Berkeley Renaissance of the 1950s and San Francisco poetry circles of the 1960s during which he rubbed shoulders with the likes Robert Duncan, Jack Spicer, Charles Olson and Stan Persky. Due to connections with Ellen and Warren Tallman, Blaser was attracted to the poetry scene of Vancouver and accepted a teaching position at Simon Fraser University in 1966 when that university was only one year old. He became a Canadian citizen in 1972 and remained teaching English until his retirement in 1986. 978-3-030-18327-1