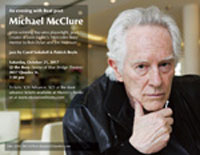 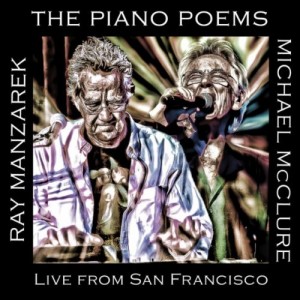 Grammas sit in chairs and reminisce. A few of the old Beat poets are still left standing. Take, for example, Michael McClure. Not only will the San Francisco writer, at age 85, be reading from his work on Wednesday, October 18 @ 7:30 pm at SFU Harbour Centre, 515 West Hastings, Vancouver, introduced by quasi-beat George Bowering, and also reading with jazz at The Roxy Theatre in Victoria on Saturday, October 21, but he’s also got a new poetry collection, Persian Pony ($21.95) out from Ekstasis Editions in Victoria, the venerable literary press managed by post-Beat poet Richard Olafson. The first event is presented by SFU Library and SFU English Dept. McClure is immortalized as Pat McClear in Jack Kerouac’s novels The Dharma Bums and Big Sur; and he influenced pop stars Janis Joplin and Jim Morrison of The Doors. He was performing with Ray Manzarek, keyboardist for The Doors, until Manzarek’s recent death. In Victoria he’ll be performing with Ekstasis editor and keyboardist Carol Sokoloff (Olafson’s wife) having joked that Carol was his only second choice after Ray. Drums keep pounding rhythms to the brain. La-de-da-de-dee; la-de-da-de-die. 978-1-77171-249-1 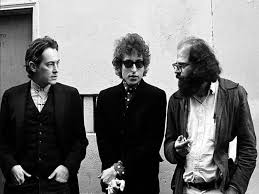