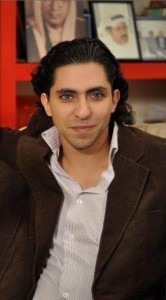 Published by Vancouver’s Greystone Books in 2015, the Saudi blogger Raif Badawi has received the PEN Pinter International Writer of Courage Award for 2015 from the international literary organization that seeks to safeguard the human rights of authors worldwide.

Each year a PEN Pinter Prize is awarded to a British writer, and shared with an international writer of courage who has been persecuted for sharing their beliefs.

This year’s British poet, journalist and literary critic James Fenton is the British recipient. A ceremony at the British Library has announced he is sharing the award with Raif Badawi.

Raif Muhammad Badawi is a Saudi Arabian writer who in 2008 founded the online forum Free Saudi Liberals, a website on politics and religion in Saudi Arabia. He has been imprisoned since 2012 and was publicly punished for expressing his opinions with 50 lashes on the 9th January 2015 on the square in front of the Al-Dschafali mosque in Jeddah. Badawi’s case has garnered international attention surrounding the topic of free speech.

A selection of Badawi’s blog posts were made available in his book 1000 Lashes: Because I Say What I Think published by Greystone Books in 2015.

According to Salman Rushdie,”Raif Badawi’s is an important voice for all of us to hear, mild, nuanced, but clear. His examination of his culture is perceptive and rigorous. Of course he must be saved from the dreadful sentence against him and the appalling conditions of his imprisonment. But he must also be read, so that we understand the struggle within Islam between suffocating orthodoxy and free expression, and make sure we find ourselves on the right side of that struggle.”

1000 Lashes was published with the support of Ensaf Haidar, Badawi’s wife, who was granted political asylum by Canada and now lives in Sherbrooke, Quebec with their 3 children. She has been tirelessly fighting for Badawi’s freedom and has organized rallies, met with US Congress and spoken to media outlets all over the world about his case.

Along with the PEN Pinter prize, Raif Badawi has also received the Thomas Dehler Medal Award,  The Franco-German Journalism Prize 2015, the Press Freedom Prize, The Difference Day Honorary Title for Freedom of Expression, the Aikenhead Award 2014, The ‘Geneva Summit Courage Award’ , and The Honour Of The City of Strasbourg.

Having shared his thoughts on politics, religion, and liberalism online, Badawi was sentenced to 1,000 lashes, ten years in prison and fined approximaely $315,000. In 1000 Lashes he expresses his opinions on life in an autocratic-Islamic state under the Sharia and his perception of freedom of expression, human and civil rights, tolerance and the necessary separation of state and religion.

One Response to “B.C. connection to PEN Award”