Another final volume from Bantock

The Pharos Gate is not quite Game of Thrones. 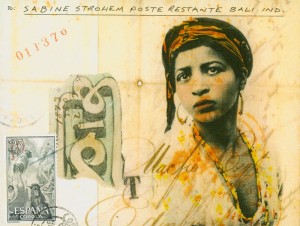 But the success of Nick Bantock’s ‘cult’ series of art books known as Griffin & Sabine has no equal in B.C. literature.

Nick Bantock’s first three titles in 1991, 1992 and 1993, featuring illustrated postcards and removable letters, spent 100 weeks on the New York Times bestseller list. It has now taken Bantock twenty-five years to reveal the fate of the two estranged lovers, who are both artists, with The Pharos Gate: Griffin and Sabine’s Lost Correspondence (Chronicle / Raincoast $34.95).

This allegedly final volume, in which Griffin Moss vows to finally meet Sabine Strohem, is being released in tandem with a 25th anniversary edition of the first volume. Bantock previously issued a title called The Golden Mean: In Which the Extraordinary Correspondence of Griffin & Sabine Concludes. Nick Bantock’s first unconventional art-novel Griffin & Sabine: An Extraordinary Correspondence (1991) received praise and popularity near and far for providing letters and postcards between lovers separated by continents. Kurt Vonnegut eventually dubbed the correspondence as “a masterpiece in four dimesions.” Griffin Moss is a lonely artist in London who receives mail from a mysterious woman named Sabine Strohem, living on an island in the South Pacific. Each page of the book contains a postcard or a letter, including an envelope. The reader removes each different message. Some are handwritten and some are typed, complete with spelling mistakes.

Bantock introduced a different couple–with less success–in The Gryphon, followed by Alexandria. Bantock reportedly completed his labyrinthine series of “visual literature” with the final volume of his second trilogy, The Morning Star, in 2003. Before Bantock produced a seventh volume in 2016, the Griffin & Sabine series was revived by Bantock for a romantic drama at the Arts Club Theatre in 2006.

The phenomenal success of British-trained designer Bantock’s series of “pop-up books for adults” began quite by accident. According to Bantock, the rough manuscript for Griffin & Sabine was discovered only after an American editor happened to notice some of Bantock’s personal doodlings. Bantock had gone to California to pitch conventional projects.

“It was at the bottom of my clothes bag,” he says. “I was only taking it along to show to a friend. As I threw the other dummies back on top, my red socks parted to reveal the dummy of Griffin & Sabine.” From The Pharos Gate

The editor reached over and said, ‘What’s that?’” The curious American editor, Victoria Rock, took it to her senior editor at Chronicle Books. It was published in Canada by Raincoast Books, who would hit the jackpot a second time by serving as the Canadian publisher for the Harry Potter series.

In the wake of his commercial success with the Griffin & Sabine books, original in both shape and design, Nick Bantock has been a pioneer in the emerging field of found art within books, along with Vancouver designer and author Barbara Hodgson, who co-founded Byzantium Books with Bantock. In much the same way that sampling in the music industry has become legitimate for recording artists, or poets publish “found poems,” technology has enabled the easy “borrowing” of imagery for rejuvenated art by graphic designers.

When Griffin & Sabine premiered at the Arts Club Theatre in October of 2006, Bantock also released Windflower (Chronicle $29.95), a fanciful, faux Italian tale of a strikingly beautiful caravan dancer, Ana, who flees an unwanted wedding. The action occurs in a timeless, fairy-tale zone with place names such as Capolan and Serona. Minus Bantock’s trademark array of assembled images, but illustrated with a variegated colour frieze at the bottom of each page, the text was co-credited to Sophia Loren’s son, Edoardo Ponti, who was writing a screenplay adaptation of the work.

Bantock has also produced an interpretation of Solomon Grundy; The Egyptian Jukebox, a complex puzzle book; The Forgetting Room and numerous other titles such as his ‘visual autobiography’ The Artful Dodger. He has also provided a ‘handbook’ to composition techniques as a visual artist entitled Urgent 2nd Class: Creating Curious Collage, Dubious Documents, and Other Art from Ephemera (Raincoast 2004) in conjunction with an art exhibition in West Vancouver, where he was living. “Urgent 2nd Class,” he says, “pays homage to the gentle art of embellishing the foxed and creased leftovers of bygone eras.”

A former resident of Bowen Island, Nick Bantock is a British-raised graphic designer and artist. “I have the habit of creating books that are none too easy to describe,” he says. From The Pharos Gate

The Golden Mean: In Which the Extraordinary Correspondence of Griffin & Sabine Concludes

The Gryphon (which introduces the reader to a new couple)

The Artful Dodger (a ‘visual autobiography’)