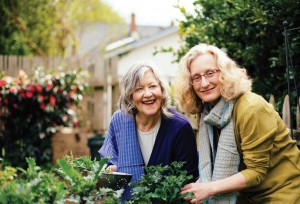 It will now go on to compete against the winners in other countries in the same category to be named the Best Single Subject Cookbook in the World. The results for that competition will be announced at an award ceremony in Yantai, China on Tuesday June 9, 2015.

Kale is the supergreen that everybody seems to love these days. It’s nutrient-dense and bursting with antioxidents and phytonutrients. It’s also easy to grow organically—it thrives in winter, sweetens in the cold and self seeds—and it has an important role supporting bees and other beneficial insects. But The Book of Kale & Friends does not only focus on kale; it also features fourteen other plants that would qualify as garden superheroes.

The Book of Kale & Friends is a follow up to the national bestseller, The Book of Kale: The Easy-to-Grow Superfood, put out by Harbour Publishing in 2012. It contains gardening tips that will help you feel like a master gardener with almost no effort at all. It also contains nutritional fast facts, and a wealth of all-new recipes, including creative and delectable ideas for breakfast, lunch, dinner, snacks—and even cocktails! The recipes are easy to follow and are accompanied by stunning and inspiring photography.

Throughout the book, Sharon and Carol empower readers to grow their own edibles, an act that not only has a positive impact on one’s health and enjoyment of food, but also on communities and ecosystems. Although the authors’ writing is lighthearted (and sometimes a little cheeky), their convictions come through loud and clear: it can be so simple, yet so fulfilling, to adopt more sustainable food practices.

Sharon Hanna writes, speaks and teaches in Vancouver, BC. She received a Taste Canada Award for The Book of Kale (Harbour Publishing, 2012) and the Mayor’s Prize for Environmental Excellence for her gardening program at Queen Alexandra School.

Carol Pope has twenty-five years of experience in editing, garden writing and organic gardening. As editor of GardenWise magazine for over a decade, and editor of gardenwiseonline.ca, she focused on organic gardening in British Columbia. Pope lives in Garden Bay, BC.