After the Hooghly River 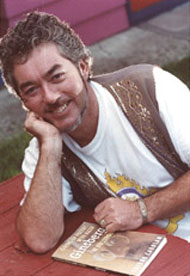 Trevor Carolan has long balanced his literary life with his spiritual concerns. Five years after the Beatles famously hung out with the Maharishi and Mia Farrow in India, Trevor Carolan first encountered Buddhism in Calcutta in conversation with a pilgrim monk on the banks of the Hooghly River. Having since written and edited an excellent history of the Literary Storefront in Vancouver, Carolan has revisited his Buddhist affinities with New World Dharma: Interviews and Encounters with Buddhist Teachers, Writers and Leaders (SUNY State University of Albany Press $75 U.S.). Including his encounter with Allen Ginsberg on Cortes Island, Carolan has chapters on Gary Snyder, the Dalai Lama, Governor Jerry Brown and Lawrence Ferlinghetti, among others. 978-1-4384-5983-7