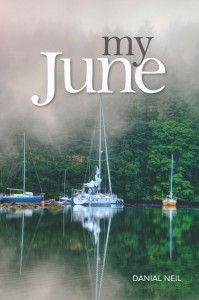 Moby Dick, the white whale, and the character of Ahab in Herman Melville’s classic novel serve as the leitmotif in Danial Neil’s second novel, my June (Ronsdale $18.95)– and, yes, there is no capital M in that title, by design. Set in the fictional town of Seaside on the Sunshine Coast, and on waters offshore, it’s the story of man named Reuben Dale who must overcome the sudden death of his wife named June after she suffers a stroke. Having recently retired with the expectation of sailing, Reuben wanders aimlessly in a town that could easily be mistaken for Sechelt while his sailboat named “my June” remains tied to the dock. A marina operator eventually encourages Reuben sail once more, but Reuben’s past brings forth new and entirely unexpected challenges. He tries to retain his loyalty to his deceased wife but seeking new friendship and joy seems to contradict that impulse. And, yes, Danial is correctly spelled without an e. Danial Neil was born in New Westminster in 1954 and grew up in North Delta. He began writing in his teens journaling and writing poetry. He made a decision to be writer in 1986 and took his first creative writing course in Langley with Rhody Lake. From that time he went on to write ten novels, mostly after work (never quitting his day job as a Sr. Development Technologist for local government). His short story, Grace, was published in the 2003 Federation of BC Writers anthology edited by Susan Musgrave. 978-1-55380-335-5