The former postman led the way for Chinese Canadian writers to enter the mainstream. 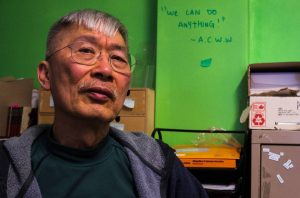 From Wayson Choy to Madeleine Thein, Jim Wong-Chu (above) was a major influence.

Jim Wong-Chu was a serious and determined figure dubbed the Moses of Chinese Canadian writing.

Jim Wong-Chu was brought to Canada at age four in 1953 where he was raised by aunts and uncles as a ‘paper son’ with false documents. At age seven he learned the woman he thought was his mother was an aunt who had lost a child born about the same time as him. He would not be able to unite with his biological family in his adopted land until many years later. He spent much of his childhood in the town of Merritt where he worked in Chinese cafes doing chores after school and on weekends. He pealed so many potatoes–150 pounds per day–that he was eventually able to do the job without looking. As a young man he came to Vancouver and worked for BC Ferries. This led to a job as a letter carrier for Canada Post. Before he became “the Moses of Asian Canadian literature,” he relearned Cantonese in Vancouver and worked as a community volunteer. The stories he gathered from the Chinese Canadian community educated him about the racial injustices faced by previous generations and also emboldened him to fashion his own identity as someone who became a Canadian under fraudulent circumstances that were not of his own making.

Accurately described by Tom Hawthorn in a Globe & Mail obituary as “a serious and determined figure,” he eventually was able to buy a modest house at 311 East 41st Avenue that became a germinating for advancing literary and cultural concerns. Jim Wong-Chu became very involved in the Pender Guy radio program on Vancouver Co-op Radio, now cited as the first English-language program devoted to Chinese Canadians. From 1973 onwards, he was also involved in a private photographic mission to document life in Vancouver’s Chinatown. His ambitions were more social than literary, but after one his own poems called old chinese cemetery (kamloops, 1977/july) appeared in an anthology of Japanese and Chinese writers called Inalienable Rice in 1979, he began to favour writing over photography.