A is for Ardley 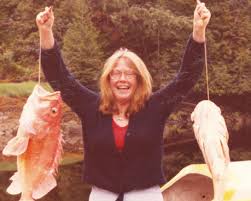 Growing up on the Canadian prairies, Pat Ardley never dreamed she would spend most of her adult life near the ocean, which she feared. But after meeting her future husband George “Hurricane” Ardley, within months the two were off to Addenbroke Island to work as junior lighthouse keepers. Thus began their life together in the wilderness. They soon left their lighthouse jobs to start a fishing lodge on Rivers Inlet, growing it into a well-known get-away through years of hard work. For almost thirty years the couple operated the lodge in the wilderness and raised two children. Pat Ardley met all the struggles and problems head-on and in time earned her own nickname – “Don’t-Mess-with-Me” Ardley. Her tales of the challenges, rewards, close calls and grizzly encounters of wild coastal life are recounted in her memoir, Grizzlies, Gales and Giant Salmon: Life at a Rivers Inlet Fishing Lodge (Harbour $24.95). 978-1-55017-831-9