A fox behind a smile

According to reviewer John Belshaw, Christy Clark eschews ideology in favour of a uniquely fluid pragmatism. 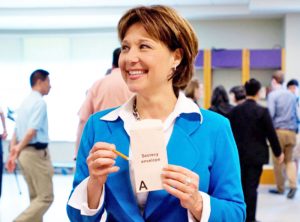 Christy Clark, Burnaby polling station, 2013: A premier "who knows a jugular when she sees one."

Her biographer Judi Tyabji believes Clark is much more than “a heartless, arrogant, corporate sellout.”

REVIEW: Christy Clark: Behind the Smile

In Christy Clark: Behind the Smile, Judi Tyabji — Liberal MLA for Okanagan East from 1991-1996 — provides a biography of Christy Clark, Premier of B.C. since 2011. In the process she charts the mainstream currents and shoals of B.C. political history over the last decade and a half.

Reviewer John Belshaw provides a close and penetrating analysis of this book and ranges over the merits, personalities, scandals, and achievements of the Christy Clark era in B.C.

This book is neither fish nor fowl. Judi Tyabji, a former MLA who broke with the Liberal Party in an acrimonious split, states at the outset that this is not a biography “…because [Christy Clark] is still premier” (1). Why this should be an obstacle to writing a biography any more than the fact that Clark still draws breath is not clear. And the book is certainly not hagiography, nor a political study per se; neither is it an edited collection of the “wit-and-wisdom” variety.

Christy Clark: Behind the Smile might be described as a corrective. Tyabji “felt the portrayal of [Clark] as a heartless, arrogant, corporate sellout did not match the truth about her or the work she was doing on our behalf” (338).

But this is an odd sort of straw woman in that, first, no evidence is provided that Clark is portrayed consistently in that way by anyone other than cranks and, second, what does it matter if she is heartless? Does a premier need to be a beacon of empathy? Is it not arguably better to have a hard-nosed and competent manager of a cabinet — filled, maybe, with empathetic ministers?

“Arrogant”? Has there been a B.C. Premier who was never accused of arrogance?

Having committed to correcting this image, though, does Tyabji succeed? It is difficult to say. The accusation that Clark is a “corporate sellout” provides an example. Mud from the 2003 BC Rail scandal stuck to Clark and her team but is brushed off with Tyabji’s glib reassurance that she “could not find any real evidence” linking Clark to the sale of the provincial asset.

What’s more, she turns to Clark herself for an explanation as to why the press linked her to the scandal (“I have no idea”), and then to her brother, Bruce Clark (“That’s a very good question”), and seems satisfied that due diligence has been done (108-10). The degree of trust Tyabji accords the Clarks is typical of what she calls an “impartial” approach to her subject and sources, in which uncritical acceptance of testimony and even-handedness are conflated.

In part this lack of investigative rigour reflects a crying need for better editing throughout. Plenty of the interviews could have been trimmed, if only to stop well-meaning sources from making fools of themselves.

For example, Tyabji quotes activist Jenny Garden, who says “It’s the fox guarding the henhouse, and it’s left all the chickens vulnerable to being devoured” (342). Is that extra detail necessary? Did we not know that fox + chickens = giblets for dinner?

We know what Garden and Clark meant, which is what should appear in print — not a clumsy misstatement. Too often Tyabji dumps whole quotes and passages into the book that might have been deftly and discreetly paraphrased or edited before publication.

The trick here is not to peer beyond a curtain but a set of teeth. Turns out there’s quite a bit behind the smile. One can barely talk about the “Liberal Party of B.C.” without considering Clark’s role in it. She was a dedicated member of the provincial party back in the days when federal Liberals pillaged its coffers and instructed its members to vote Social Credit. Clark was known in the 1980s and 90s to be “a true believer,” someone who wanted the Liberals to be a political force in B.C. independent of the Socred coalition.

Tyabji finds her feet when she describes the internal wrangling that led to Gordon Campbell’s rise and the subsequent shift in allegiances from the Party of Bennett to a resurrected Liberal brand in the 1990s. Clark, the true believer, suddenly found herself surrounded by the very people against whom she used to rail. Christy Clark at Vaisahki Day, Surrey, 2016: A premier “who knows a jugular when she sees one.”

The enmity within the right-wing coalition is no small matter: it nearly consumed Clark as party leader in the 2013 election campaign. The “801s” — so called because they expected Clark to fail and proposed to start the replacement campaign at one minute after the polls closed on e-day — made her life a misery, much more so (it has to be said) than the NDP on Adrian Dix’s watch.

For political observers in B.C. this may be revelatory. Clark beat the odds, sent packing those rightist Liberals who wore a lean and hungry look, and won a solid mandate in 2013. Did this usher in the return of genuinely Liberal leadership? Was it an opportunity to advantage fellow true believers within the Party of Free Enterprise?

Perhaps. But the Liberals lost traditional strongholds like Point Grey, and gained representation from traditionally conservative, evangelical, and hardcore Social Credit territory like the Fraser Valley, the North, and the Okanagan, where Clark won her seat in a by-election whilst paying homage to the Bennett dynasty.The question that Tyabji leaves hanging, then, is Clark still a true believer? The Premier herself avoids the old categories and describes the Liberal Party as a broad church in which all God’s children may belong: “…there are left-wing BC Liberals and right-wing BC Liberals; there are green (pro-environment) Liberals and brown (pro-resource job) Liberals” (350).

Reader: your mission, should you choose to accept it, is to find a British Columbian who will say aloud, “I am a brown Liberal.”

What does Clark actually believe, then? She eschews ideology in favour of a uniquely fluid pragmatism. It is a canard to say she is not an intellectual; she doesn’t pretend to be, and intellectuals do poorly in the Premier’s office. She’s no dope, but she seems vulnerable to persuasion. This may explain some policy inconsistencies. She voted against the Nisga’a Treaty (1998) and then took up Aboriginal issues with a passion.

She takes advice on environmental issues from her son, which, by the way, is not cute or endearing, and is setting up the poor boy for a lifetime of blame from his peers — and from corporate bosses.

The Premier, in fact, looks a bit of a sucker. “I went out and started talking to industry about what we would need to do in order to attract investment to B.C. for [Liquefied Natural Gas]. They said you need a trained work force, a competitive tax regime, good environmental legislation, you have to work with us on First Nations issues, and you have to make sure the communities are ready” (166). Fine words, but what can “good” environmental legislation mean in this context? In the absence of any interpretation by Tyabji, is it cynical to read this as a request from business to spend a lot of public money training workers who will be used up and thrown away, to cut taxes so the beneficiaries don’t have to carry the costs, to tie the environment to the railway tracks, arm-twist indigenous peoples, and market it all at Treasury expense? I must remember to start a corporation very soon. It sounds like a great deal of fun.

Perhaps this is just the biography for our post-truth era. Fact checking has been put on hold. No one’s veracity, let alone their venality, is called into question. When Rich Coleman — Deputy Premier and Minister of Energy and Mines — declares that “This government has done more for people on the social side than any other government in history,” one wants to cry out, like Zaphod Beeblebrox, “Don’t eat that, Arthur!”

When we’re told that B.C. produces “only” 0.2 percent of the world’s carbon emissions, Tyabji fails to ask the obvious question of per capita outputs. With merely 0.06 percent of the human population, we’re well over our share of carbon. This matters because the reassuring “only” is deployed in service of various energy project proposals.

What the book delivers is a sense of what Premier Clark, an undeniably accomplished leader and political figure, is up against. That includes a world of casual sexism that is so pervasive that even her otherwise-alert biographer notes her “curviness.”

Up against the NDP, Clark has also proven effective in driving “wedge” issues into the heart of the left. It is hard not to come away from this thinking that Clark knows a jugular when she sees one, and that what we’ll find behind that smile is another row of teeth. John Douglas Belshaw is a writer, professor, consultant, and an award-winning historian.  He is the author, co-author, contributor, and editor of several books, including Becoming British Columbia: A Population History (UBC Press, 2009), Colonization and Community: The Vancouver Island Coalminers and the Making of the British Columbian Working Class (MQUP, 2002), Vancouver Noir: 1930-1960 (Anvil, 2011), Private Grief, Public Mourning: The Rise of the Roadside Shrine in British Columbia (Anvil, 2009), Vancouver Confidential (Anvil 2014), and two open textbooks on Canadian history (BCcampus 2015 & 2016). Belshaw resides in Vancouver’s East End where he runs, messes about with fiction, and teaches online with Thompson Rivers University.

5 Responses to “A fox behind a smile”