A Dog at a Feast 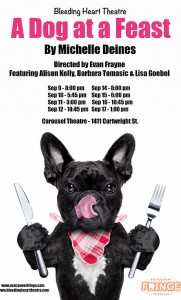 From the company that brought you last year’s fringe hit The Fighting Season comes a workshop production of Michelle Deines’ new play A Dog at A Feast . Playing  Setpember 9 to 17 at Carousel Theatre, 1411 Cartwright Street, Vancouver. Tickets are $14.

This dark comedy about the nature of criticism includes the cast of  a jaded arts critic who glories in writing bloodthirsty reviews for the shows she thinks are sub-standard, an up-and-coming starlet who has been on a string of luck and therefore sees nothing but possibility, and a veteran of the whole scene who has sees things exactly as they are, and is therefore thoroughly depressed.

Michelle Deines is an award-winning writer, producer, and director. She is Co-Artistic Producer of Working Spark Theatre and holds and MFA in Creative Writing from UBC.

Bleeding Heart Theatre is an award winning artist run, project based company whose production of The Fighting Season won the 2015 Georgia Straight Critics Choice Award and the 2015 Culchivating the Fringe Award. Nominated for Jessies for his work as an actor and director, Evan Frayne is the founding artistic director of Bleeding Heart Theatre. A recipient of the Sam Payne Award for Most Promising Newcomer, Evan is currently in his final year of the MFA in Directing program at UBC.