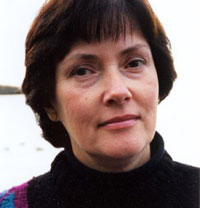 “Although the Ginger Goodwin Way signs on the inland Island Highway, where it passes through Cumberland and beside the cemetery where he is buried, were removed shortly after the election of the B.C. Liberal government in 2001,” wrote Saanich author Roger Stonebanks to the Victoria Times-Colonist in November of 2012, “he remains officially commemorated by Ginger Goodwin Creek (named in 1982) and Mount Ginger Goodwin (named in 1989), thanks to Ruth Masters of Courtenay and the Cumberland and District Historical Society. The commemorations have been adopted and recorded by the B.C. Geographical Names Information System of the provincial government.”

Susan Mayse, granddaughter of a Yorkshire coalmine worker, is the daughter of journalist and author Arthur Mayse. While she was writing her biography of union rebel Albert Goodwin, Susan Mayse lived at 2532 Dunsmuir Avenue in Cumberland from 1989 to 1992. It was one of the original 1889 coal miners’ houses and it served as the subject of paintings by artist Brian Scott in 1991.

The street was named for coal mining magnate Robert Dunsmuir, who was fiercely intolerant of workers’ rights. “I was certainly aware of the irony of the street name,” says Mayse, “but the Dunsmuirs were long gone by the time Goodwin worked for and was blacklisted by CC(D)L, and for better or worse, the Dunsmuirs were as much a part of Cumberland history as he was. No one in Cumberland called that part of it Dunsmuir Avenue. They would say I lived ‘away down Camp Road’ or just ‘down Camp.'”

Susan Mayse is a fourth-generation Vancouver Islander who grew up on stories about the mining towns of Cumberland, Bevan, Nanaimo, and Wellington. She is mainly known on the West Coast as the author of Ginger: The Life and Death of Albert Goodwin [1990], winner of the Arthur Ellis Award for True Crime and the Edna Staebler Award for Creative Non-Fiction. Arriving on Vancouver Island in 1910, the socialist Albert ‘Ginger’ Goodwin was a slight, red-haired man who was later chased into the wilderness around Comox Lake as a draft evader and suspected revolutionist. He had run unsuccessfully for parliament in 1916 and demanded an eight-hour day for miners in Trail. In 1917, he had brought 1600 Consolidated Smelter workers to strike action, upsetting Canadian arms manufacturing.

Goodwin was a coal worker with a serious lung condition whose only crime was evading conscription. The shooting of the labour socialist in July 27, 1918, by Dan Campbell, at the behest of Canada’s Dominion Police, sparked a 24-hour protest strike and labour unrest across Canada.

Roger Stonebanks’ biography, Fighting for Dignity: The Ginger Goodwin Story (Canadian Committee on Labour History, 2004), includes a chapter by Victoria lawyer Adrian Brooks on the legal aspects of the controversial shooting of Goodwin by special constable Dan Campbell. The Cumberland Museum on Vancouver hosted a book launch in March of 2004. (Brooks became a Victoria Provincial Court; the Canadian Committee on Labour History relocated from Memorial University to Athabasca University in Alberta).

According to Stonebanks: “At the time, it was reported that Goodwin was shot and killed on Lone (later named Alone) Mountain. The Cumberland and District Historical Society successfully petitioned to correct this by having a then-unnamed nearby mountain (on the other side of Cruickshank River) named Mount Ginger Goodwin, which is now accepted as where the killing occurred.”

Laura Ellyn, a writer and editor based in Montreal, has also published a graphic novel-styled account, Ginger Goodwin: A Worker’s Friend (Between the Lines 2015).

Susan Mayse of North Saanich supports herself as an independent writer and editor. She has written for many national and international publications including The Daily Mail, The Toronto Star, and The Malahat Review. She has also worked as a scaler in a salmon cannery; reporter for daily newspapers; late show disk jockey for CBC Yellowknife; photographer and darkroom manager for a weekly newspaper; and researcher, field reporter and scriptwriter for a weekly television program.

Mayse’s thriller Merlin’s Web, a novel about terrorism in contemporary Wales, concerns the kidnapping of the Queen of England’s son and his Scottish nanny by Welsh extremists. Their leader, Gwyn Davies, code name Merlin, has enlisted assistance from the IRA and Red Brigades but friction develops among the terrorists. The plans of the Welsh nationalist go seriously awry. Because the novel was deemed seditious, Mayse was barred from speaking in Alberta schools, the book was refused entry into a national First Novel contest and the federal government withdrew support from its New York book launch. According to Mayse, it was reviewed almost solely on its perceived political stance and not as a discussion of state versus ideological terrorism.

Susan Mayse’s complex and historic tale of 8th century Wales, Awen (Eastern Washington University Press c/o UBC Press, 48.95), recounts the quest of Welsh poet Cynfarch to be reinstated as bard of the royal court and as leader of his people in Penllyn. Cynfarch’s journey from dispossessed hostage to king’s poet takes him through the valleys and mountains of North Wales, along the rivers of Western England and even into the arms of a second lover — a man. Battles, kidnappings and assassinations mark the struggle of Welsh kings to maintain sovereignty against their English neighbors. With its faithful attention to Welsh language and its deep respect for Welsh heritage, Awen is a companion volume to Merlin’s Web.

AWARDS: First Novel Award (runner-up) 1987 and Arthur Ellis Award 1990 of the Crime Writers of Canada, Edna Staebler Award for Creative Non-Fiction 1990, plus others. Ginger: The Life and Death of Albert Goodwin (Harbour Publishing 1990)

Reviews of the author’s work by BC Studies:
Ginger: The Life and Death of Albert Goodwin
Victoria: Crown Jewel of British Columbia, Including Esquim