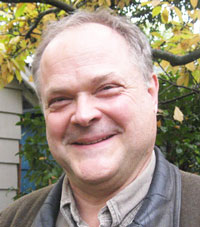 LOCATION: Sugar Lake, north of Cherryville, in the Monashee Mountains. Directions: From Vernon, drive 50 km east on Highway #6 to Frank’s General Store (Tempo Gas Station) at Cherryville on the corner of #6 and Sugar Lake Road. Turn left (north) onto Sugar Lake Road and go 17 kms to Sugar Lake. You will pass Kate Creek Road on your right as you approach the lake. Continue downhill to the one-way bridge.

Historian Richard Mackie has often written at his family’s off-the-grid cabin, built in 1922, on the reservoir that was formerly a lake before it was flooded in 1944. Designed by Austin and Hugh Mackie, the fishing cabin was built in 1922 by Bill Fraser and Bill Hollingsworth, both backwoodsmen who were veterans of the West Kootenay hardrock mining boom of the 1890s. The cabin has also been the inspiration for the work of his sister Christina Mackie, an artist who has lived in London since 1975. Richard Mackie wrote several of his books at Sugar Lake, particularly his biography of George Drabble. The cabin at Sugar Lake, 1968 painting by Paddy Mackie.

Since 2011, B.C. historian Richard Mackie has been associate editor and book reviews editor at the journal BC Studies. He has also been an an adjunct professor in the Geography Department at UBC.

He writes “As a kid in North Saanich I collected old bottles. My moment of triumph was digging Judge Begbie’s dump at his summer house at Elk Lake. It contained rare Scotch whisky bottles as well as Chinese pottery. I did incalculable damage to many old sites. My only consolation is that most sites have now been entirely obliterated by dredging or development. Historical archaeology is still almost non-existent in this province anyway. I also collected First Nations basalt arrowheads, scrapers, and bone needles, which could still be picked up on local beaches. Eventually I put my experience as a “pot hunter” to good use by working in BC archaeology between 1976 and 1984. I also studied mediaeval history at the University of St Andrews and history and historical geography at the universities of Victoria and British Columbia, where I obtained a PhD in 1993.”

Mackie has twice won the province’s top honour for historical writing about British Columbia, once for his book on early fur trading and again for his study of logging on Vancouver Island. Richard Somerset Mackie¹s Mountain Timber: The Comox Logging Company in the Vancouver Island Mountains (Sono Nis 2009) is the sequel to Mackie¹s best-selling Island Timber: A Social History of the Comox Logging Company, Vancouver Island, which went through four printings and nearly 7,000 copies. Whereas Island Timber was set on the low-lying coastal flats adjacent to the Strait of Georgia, Mountain Timber is concerned with Comox Logging¹s later and higher fortunes in the densely-forested valleys and lakes of the Vancouver Island Mountains. As the company depleted its supply of coastal Douglas fir in the 1920s, it moved inland to log the Bevan sidehill, the shores of Comox Lake, and the valleys and tributaries of the Puntledge and Cruickshank rivers. But wherever it moved, the company had the same purpose: to find and cut mature Douglas fir forests. The action in Mountain Timber takes place between 1925 and 1945 — the two critical decades when most of the available lowland timber was cut. This absorbing book also revisits Comox Logging’s railway logging shows out of Headquarters and Camps 1, 2, and 3, around Oyster River and Black Creek.

For Home Truths, Richard Mackie writes: “Early in 2012, Howard White of Harbour Publishing invited me to edit a collection drawn from the first forty-four years of BC Studies (1968-2012). Graeme Wynn, the BC Studies editor, and I assembled an anthology of representative articles, published in November 2012 as Home Truths: Highlights from BC History.

“Somehow we narrowed 600 articles down to ten works arranged on the theme of “finding home” as outlined in George Bowering’s landmark article “Home Away” in BC Studies in 1984. Graeme and I have written an introduction to the volume concerning the search for home on the West Coast — safeguarding old homes for indigenous peoples and making new ones for settlers.”

Lieutenant-Governor’s Medal (British Columbia Historical Federation) 2001 and 1999 (and runner-up in 1986);

Duncan, a Shetland Islander, was suspicious of progress in the 1940s and remained true to rural values akin to the 1870s. Every year he donated two sacks of oatmeal to the Community Chest drive. He considered potatoes ‘a universal blessing’ and considered motorcars the bane of existence. He died at age 85 in 1944, eschewing eggs because they weren’t necessary.

Cecil ‘Cougar’ Smith was even more legendary as a hunter who also adopted orphaned cougar cubs and gave them to zoos in Canada and the United States. Smith, his wife and five children operated a farm at the mouth of the Oyster River.

Mackie interviewed more than 100 old-timers and gathered dozens of
never-before-published pictures. As someone who grew up in Merville with a father who worked for the CLC, novelist Jack Hodgins can be forgiven for saying Mackie’s book “rivals the national epics of some small countries!”

The Comox Logging Company had 450 employees, six steam-powered skidders, a dozen locomotives, hundreds of miles of track and sole access to the Douglas Fir forests between Courtenay and Campbell River. The company supplied Fraser Mills in New Westminster when it was the largest sawmill in the British Empire. 1-55039-101-1

Trading Beyond the Mountains (UBC)

Currently working on a book about Vancouver Island cougar hunters and a history of the Comox Logging Company, Richard Somerset Mackie has won the Lieutenant Governor’s Medal from the B.C. Historial Association for Trading Beyond the Mountains (UBC), his study the early British fur trade. There were 29 entries.

Richard Somerset Mackie became an historian at age eleven when he started digging up old bottles from an Edwardian-era dump near his parents’ North Saanich home in 1969. His tool kit consisted of a trowel, hoe, short-handled shovel and a bucket.

“Once this dump was exhausted,” he says, “I moved to other parts of Tsehum Harbour and eventually to the shoreline and old farms of North Saanich.” While digging at Judge Matthew Baillie Begbie’s former summer house at Elk Lake, he found exquisite Scotch whisky bottles as well as Chinese pottery to augment his collection of First Nations basalt arrowheads.

His parents, who were academics at the University of Victoria, encouraged him to take an extended sabbatical in Britain and Europe in 1974-75, during which he explored Corfu on a moped, hitchhiked through Provence, walked the length of Hadrian’s Wall (it rained the whole way), explored the Thames at low tide and climbed Traitor’s Gate into the Tower of London.

After studying mediaeval history at the University of St. Andrews, and later archaeology, history, and historical geography in Canada, Mackie obtained his Ph.D from UBC in 1993. Three books and four years later, Mackie won the BC Historical Federation’s top book award for Trading Beyond the Mountains (UBC Press, 1997), a study of the fur trade.

By digging deeper into his own backyard, Mackie won that same prize again, this time for volume one of his social history of the Comox Logging Company, Island Timber (Sono Nis, 2000).

Mackie is back with its sequel, Mountain Timber (Sono Nis $42.95), opening with a quote from former Socred cabinet minister and Bible-thumper Phil Gaglardi, “Those trees weren’t put on that mountain by God to be praised, they were put there to be cut down.”

Whereas Island Timber was set on the low-lying coastal flats adjacent to the Strait of Georgia, Mountain Timber covers the company’s later and higher fortunes in the densely-forested valleys and lakes of Vancouver Island, mainly between 1925 and 1945.

As the company depleted its supply of coastal Douglas fir in the 1920s, it moved inland to log the Bevan sidehill, the shores of Comox Lake, and the valleys and tributaries of the Puntledge and Cruickshank Rivers. Mountain Timber also revisits Comox Logging’s railway logging Camps 1, 2, and 3, around Oyster River and Black Creek.

Overall the company logged what seemed like an endless supply of timber in the Comox Valley, producing more than six billion board feet of lumber. Mackie estimates that’s enough timber to “build at least a million homes—enough to house everyone in British Columbia.”
Mostly the Comox Company harvested Douglas fir. With growth rings of 50 or 60 per inch, the remarkable Douglas fir was in high demand for house construction back in 1912, and when these homes are demolished today, the wood is sometimes shipped to the U.S. to be “re-sawn and re-sold.”

Mountain Timber is also the story of the men who worked for Comox Logging, some sticking with the company for their entire working lives; people that logging poet and engineer Robert Swanson once called the “Homeguards.”
Mackie conducted interviews with employees and their descendants—skid greasers, scalers, cooks, fallers, bookkeepers, saw filers, logger sports champions (one who could bend six-inch spikes into horseshoes), teachers and wives.

With a workforce made up primarily of Swedes, Finns, Scots and English, Comox Valley Logging was also one of the first B.C. companies to hire locally; chief engineer Robert Filberg encouraged employees to buy land in the Comox Valley, put down roots and start farming.

The company sold land to one entrepreneur who built Fishermen’s Lodge on the Oyster River. His grandson remarks, “Before that, the men at Camp 2 would go to Vancouver and get pissed up…. it [the hotel] was a way of keeping local employees.”

Interviewee Doris Walker recalls, “Filberg did something for logging: he instilled in his workers how nice it would be to have a little ranch or chicken farm, because they were shut down in the winter for the snow, in the summer for fires, and sometimes in between for strikes. No money was coming at these times. So they listened to Filberg and bought property, and did what he suggested.”

Comox Logging had the financial muscle to harvest, cut, ship and distribute lumber as a subsidiary of Canadian Western Lumber Company. It was an “integrated” company long before we labelled them as such.

“In 1911 Comox Logging became the first Canadian company to introduce highlead logging, then known as aerial logging,” writes Mackie, “in the form of state-of-the-art, track-mounted Lidgerwood steam skidders. Steam tugs towed booms of logs to Fraser Mills (the name of a Canadian Western subsidiary as well as the associated company town, now part of Port Coquitlam). There it was sawn for export and for shipment by rail to the Prairies, where Canadian Western’s lumberyards numbered around 200 in 1912.”

The photographs in Mountain Timber really help make this book. Many are on loan from family albums, and they display skills, machinery and monster Douglas fir trees long forgotten. According to one retired forester, some of the stumps, “took three strides to get across.”

High riggers balance atop head spars 140 feet above the ground (these were huge trees stripped into poles for
pulling logs off hillsides). One of them, Herman Anderson, great-grandfather of actress Pamela Anderson, was considered one of the best men at his job in B.C. before he was killed when a guy-rope jarred loose and hit him.

Mountain Timber features baseball teams, dance halls and female world bucking champions. “I could see why Jack Hodgins, whose father and uncles worked for Comox Logging, has written so prodigiously about the Comox Valley,” writes Mackie. “Like the paintings of E.J. Hughes, the history of Vancouver Island combines equal strands of industry, agriculture, forested landscape, and working people, and a large canvas to portray it all.”
Mackie builds commendably on the work of local historians and newspaper accounts, but it’s the voices of employees and descendants that give this account its lifeblood, detailing a way of life that sustained communities and families for decades—until the timber ran out.

Only 2% of that Douglas fir forest remains, and today many Vancouver Island communities are facing the harsh reality of mill closures and drastically reduced timber supply. 1-55039-171-2