From the Heart of it All: Ten Years of Writing from Vancouver’s Downtown Eastside
by Heidi Greco (editor)

For ten years (2008-2018), the Thursdays Writing Collective was an important part of Vancouver’s literary scene. At its goodbye party in April 2018, its founder, Elee Kraljii Gardiner, reflected on From the Heart of it All: Ten Years of Writing from Vancouver’s Downtown Eastside, a selection of a decade’s creative output:

This anthology is a culmination of our ten-year journey. We held the first of our free, drop-in creative writing sessions on February 14, 2008. In that decade Thursdays Writing Collective has done what it set out to do, times ten . . . The program draws to a close but the literary friendships and relationships we have formed amongst ourselves are permanent. The voices in this book will endure beyond this moment.

Ormsby reviewer Yvonne Blomer praises a collection of writing “that is free and innovative, free from pretence.” — Ed. 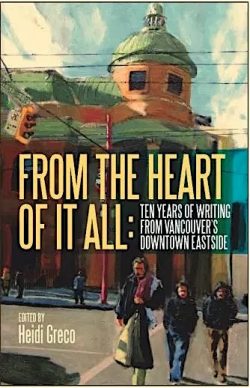 From the Heart of it All: Ten years of Writing from Vancouver’s Downtown Eastside, edited by Heidi Greco, is a collection of poems, stories, haiku, and prose ramblings that captures the essence and depth of daily life in the west coast city. These pieces are not fixed in the Downtown East Side (DTES), but they were created there. Through ten years of weekly Thursdays Writing Collective gatherings, stories and poems emerged that seem, when you read the author bios, to have led some to further accomplishments as writers, artists, or academics beyond the boundaries of the DTES.

The Thursdays Writing Collective, which ran from 2008 to 2018, was founded by Elee Kraljii Gardiner and was directed and facilitated in its last two years by Amber Dawn, Cara Lang, and Curtis Au Coin. In her introduction, Gardiner explains how the collective came to be and how essential it has been. “These exceptional storytellers and authors needed space, time and support more than ideas or confidence-boosting. Even my own writing got better.”

In a time of flux, as we are now in, with refugee crises, a resurgence of antisemitism, fear of Muslims and fear for them, rising conflicts and climate change, I can’t help but find refuge in a book such as this that creates a “community between communities” through writing. And so the pieces speak among themselves and make connections. 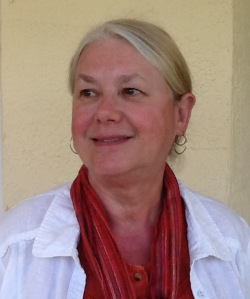 From the opening haiku, “Facing poverty/ you laugh, open wide the door/ to the pinched homeless,” by Han Sen, to “Death Is Alive Here/ Hate Is Real Here/ God Doesn’t Exist Here/ Welcome to the DTES,” by Henry Doyle, in “Poetry of a Squared Room,” the reader is thrust into the DTES. The reader is also welcomed, shown around, and walked through with direct prose and with chorus and incantation: “They shuffle people in and out/ Renovations don’t you shout/ Promising improvements/ Just watch my comments” (Cindy McBride, “Renovations”). The tone here is direct, because life is too.

A few years ago I had the great pleasure of appearing on Vancouver’s Co-op radio station with Kevin Spenst and Pamela Bentley. As a visitor to Vancouver, I was thankful to have a friend walk me to the radio station (I am directionally challenged) right in the heart of the DTES on Hastings Street. After the show, Kevin kindly walked me out again. I say “out” with some trepidation, as it is after all just a street in downtown Vancouver.

There was nothing spoken about the area we were in. Kevin just led me down and along. Quite quickly our surroundings changed from impoverished streets with throngs of people, piles of clothes, the scent of urine, and abandoned drug paraphernalia, to flashy storefronts and possibly one of the wealthiest streets I’ve visited. I was thankful and fully taken aback by the contrast. I was thankful for the opportunity to appear on the radio and to walk down East Hastings, and taken aback by how quickly the Vancouver streetscape shifts from poverty to wealth. 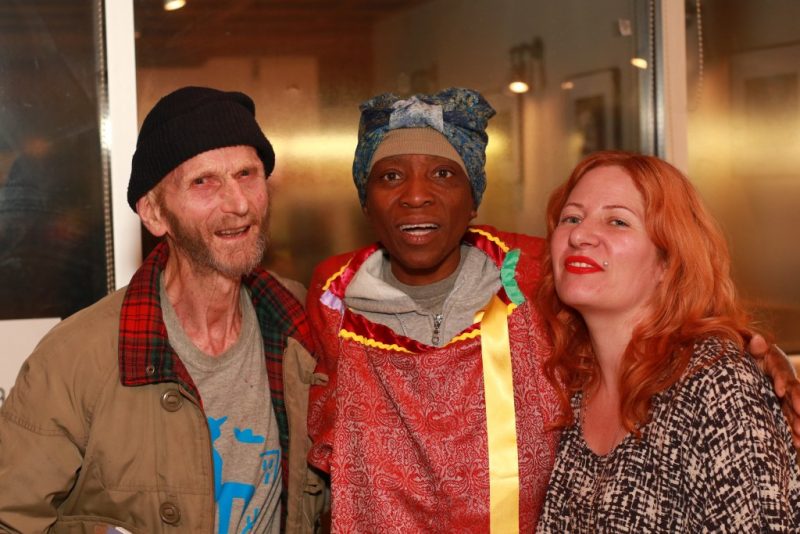 L-R: Graham Cunningham, Nympha Angeal-Eyes Francis, and Amber Dawn at launch of From the Heart of it All at Vancouver Film School cafe, April 2018. Photo by Tom Quirk

Such shifts are set on the page in From the Heart of it All. Through a choice of haiku and sections such as “Where We Live,” “Who We Are,” and “How We Live,” Greco has built connections in theme as well as leaps in topic, so that you might go from the scents of food in childhood in Bakir Junaideen’s “Aroma and Memory: “walking through the country food fair/ memories stream from the aroma/ of jack fruit and coconut cream – my mother’s cooking –” to Beth Buchanan’s “In the River,” where a young life is captured in these lines: “My Metis blood – the blood that gave birth,/ squatting, born to the Earth Mother.”

One of the great blessings of an anthology is that it can contain many voices. Some anthologies are about celebrating the best poetry or prose of our time, others focus on a theme, and some are created to share and capture moments in life. What has brought these particular voices together in From the Heart of it All is that they were gathered over many years of teaching and writing in a particular space, the Carnegie Community Centre, which is shown on the book’s cover. The ebb and flow of these gatherings meant they did not always consist of the same people, but the book makes sure that the essence of the Carnegie space is felt throughout. 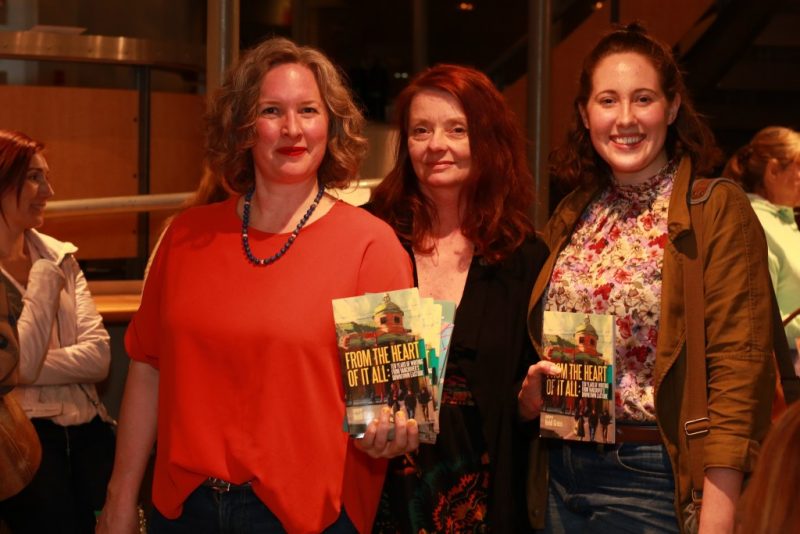 This essence is also preserved in the collective’s Manifesto and in the desires of its members. The manifesto asks, in part, “For all voices to be heard equally. To accept difference. To respect honesty…. To write from the heart….To listen, listen, listen….” Perhaps the essential parts of the manifesto are the last two:

Let us abandon pretence and hypocrisy to be who we really are. To write in such a way that people from all classes, genders and races can understand, appreciate and communicate.

These two ideas lend themselves to writing that is free and innovative, free from pretence, free to communicate, a combination that leads to a creation of form and a freedom to play. 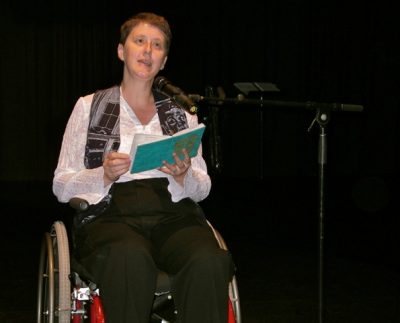 One of the most playful sections in “How We Live” is where poems play with words and antonyms, with repetition and prose making leaps between culture and experience, particularly in Meg Torwl’s “Eight Doors to Happiness.” Here, wheelchair bound, she goes from apartment to classroom through eight doors, a sequence held in eight paragraphs each ending with a line of wisdom from Buddha.

After a particularly challenging set of stairs and an automatic door that opened into her, Torwl writes:

Try to get out of the way as the door opens towards me. hitting me …. there is not enough time to enter (the elevator) before the door closes. slamming into me. buddha says: admit defeat and offer the victory.

These passages are hard, and the writer’s life is full of struggle; yet humour surfaces along with a delight in getting to where she wants to be.

Anthologies often offer journeys in and out of a multitude of voices and experiences, and From the Heart of it All certainly does. The work of DTES residents appears alongside that of more established writers, and yet the work flows from one experience and struggle to the next, and then into the Thursday Writing Collective workshops, as Heidi Greco notes in her introduction:

These are people whose experiences can make my sheltered life seem like an embarrassment. These are people who have seen it all – and who, through their ongoing workshops and writing together, have learned to tell it from the heart.

Most remarkably, the book placed me, as a reader, in Vancouver itself and its multinational, cross-gendered, cross-generational urban heart, and offered a glimpse of the multifaceted array of experiences of the city and the people who have grown there or have been pulled into it. 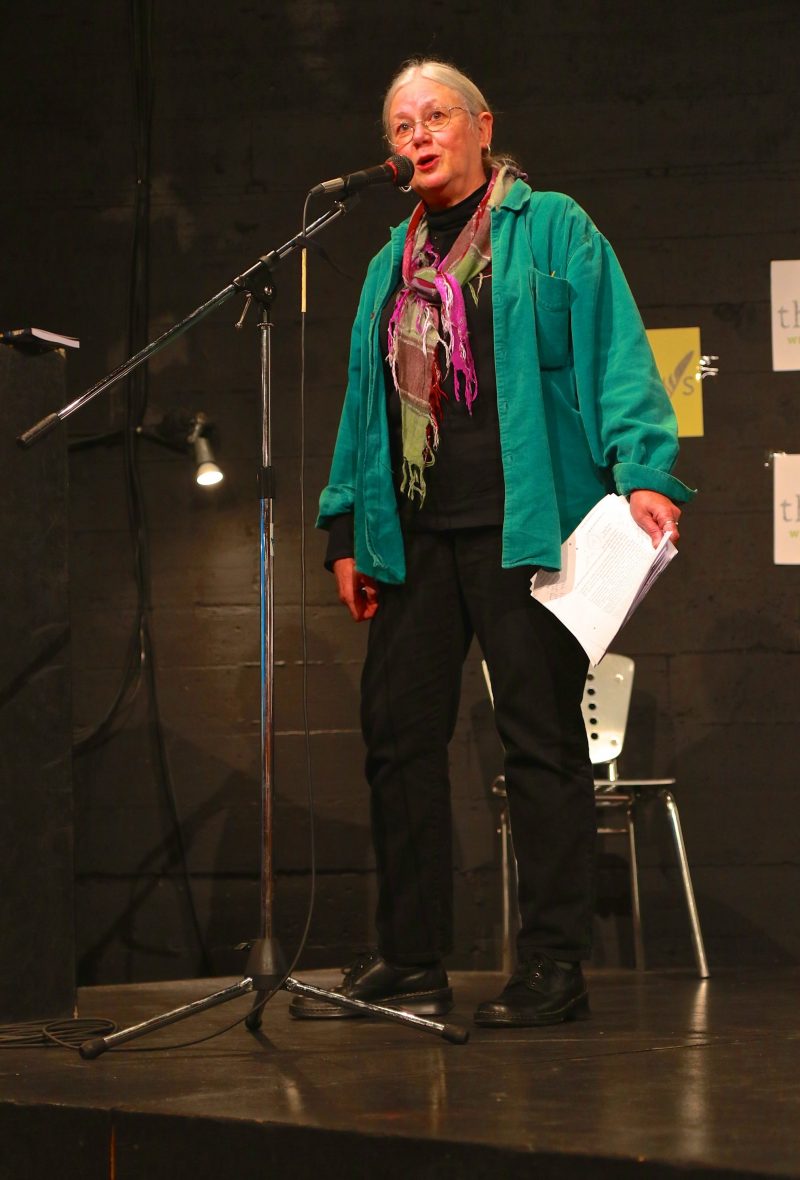 Editor Heidi Greco at launch of From the Heart of it All at Vancouver Film School cafe, April 2018. Photo by Tom Quirk 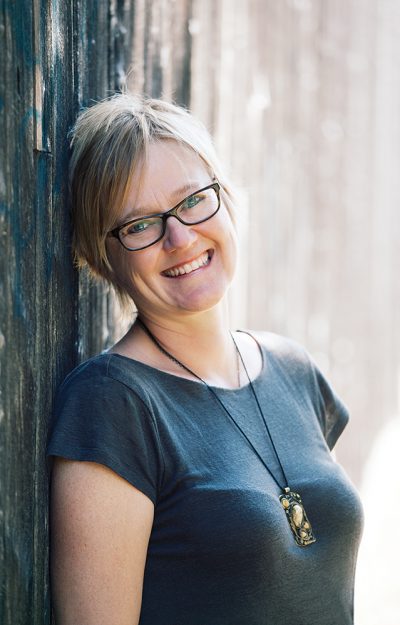 Yvonne Blomer is the past poet laureate of Victoria, having served from 2015-18. She is the editor of Refugium: Poems for the Pacific (Caitlin Press, 2017) and author of Sugar Ride: Cycling from Hanoi to Kuala Lumpur (Palimpsest Press, 2017) as well as several poetry books, most recently As if a Raven (Palimpsest Press, 2014). Her art opening “Ravine, Mouse, A Bird’s Beak,” ran recently at the Robert Bateman Centre in Victoria. Next up is book two in the Refugium Trilogy, Poems for the Watershed (Caitlin Press, forthcoming). She lives, works, and raises her family on the traditional territories of the WSÁNEĆ (Saanich), Lkwungen (Songhees), Wyomilth (Esquimalt) peoples of the Coast Salish Nation.  “I give thanks for the privilege of being here,” she adds. Her website is www.yvonneblomer.com 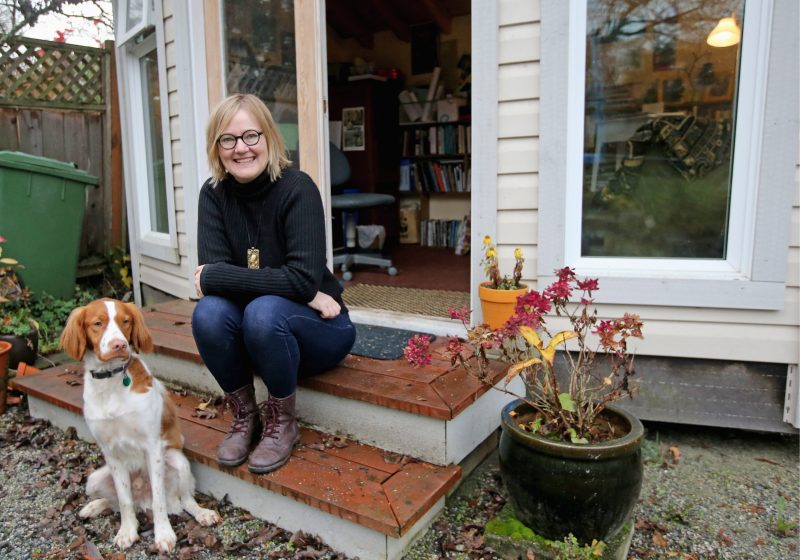 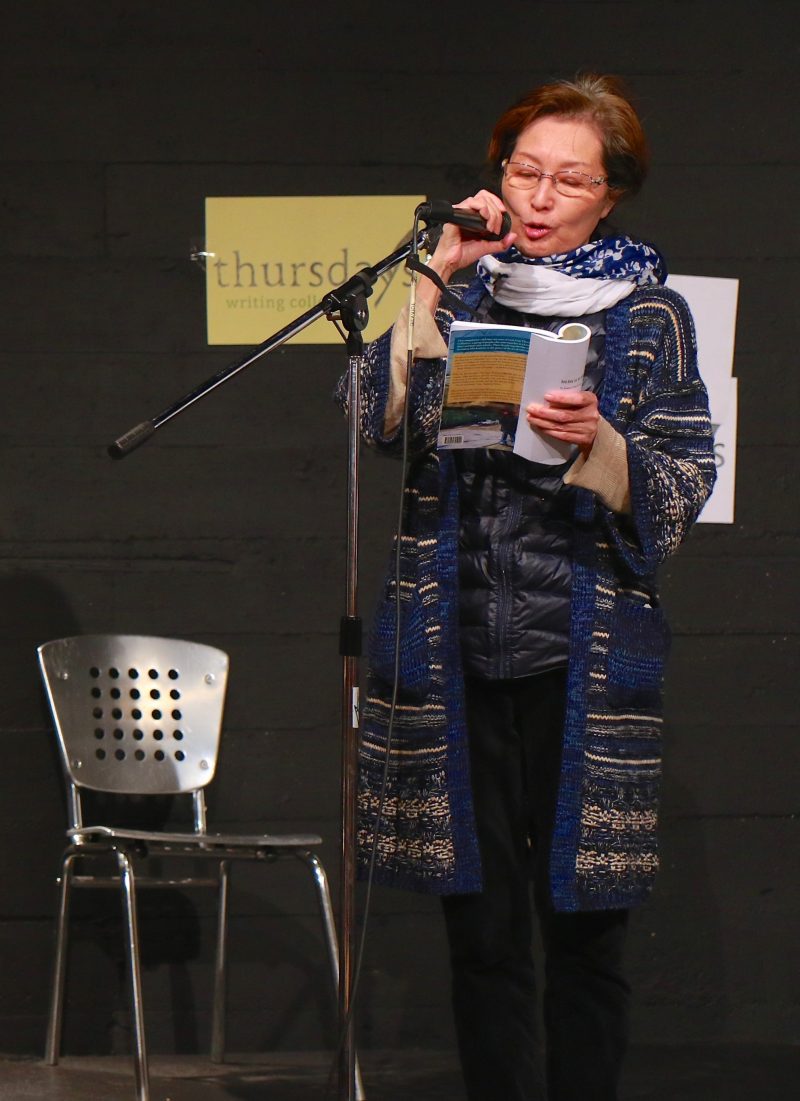 Contributor Anita Lo at launch of From the Heart of it All at Vancouver Film School cafe, April 2018. Photo by Tom Quirk