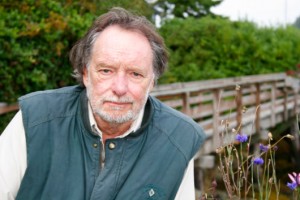 ENTRY: Those who have braved the 60-mile gravel road from Port Alberni to Bamfield can easily agree with Simon Winchester’s assessment of Bamfield in the New York Times as a tight-knit town full of hidden intrigues and eccentrics…”the perfect subject for a novel.”

Modelled on John Steinbeck’s classic Cannery Row, Louis Druehl’s debut novel Cedar, Salmon and Weed (Granville Island 2015) describes Bamfield on the west coast of Vancouver Island in the 1970s through the eyes of a well-intentioned local known as Gaz, a builder, marine biologist and marijuana cultivator who dreams of building a cedar palace. He’s a hard-working guy who falls hard for Heidi, a visiting student at the local marine research station. Along the way the reader is introduced to an endearing and believable mix of fishermen, hippies, First Nations and the scientists. It’s the Great Bamfield Novel by someone who knows the town’s manners and history.

Druehl’s book Pacific Seaweeds (Harbour) is the authoritative guide to over 100 common species of seaweeds in the Pacific Northwest, ranging from the coastline of southeast Alaska to central California. A seldom-acknowledged B.C. classic, it has reputedly sold 10,000 copies. Also editor of The New Bamfielder, Louis Druehl was a professor of marine botany at Simon Fraser University for thirty years. He has also taught field-oriented seaweed courses at the Friday Harbor Marine Laboratories and was influential in establishing the Bamfield Marine Station, often working in association with the University of Alaska. His research focuses on all aspects of kelp, including its evolution, ecology and physiology.