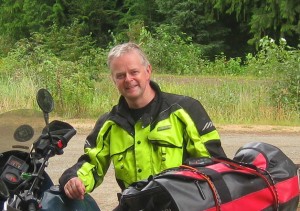 To mark his fortieth birthday, Vancouver-based Trevor Marc Hughes, a former CBC Radio Vancouver arts reporter, decided to undertake a solo exploration of northwestern B.C. on his Kawasaki KLR motorcycle, visiting such places as Stewart, B.C. and its close neighbour, Hyder, Alaska, the totems of the village of Gitanyow and the Stikine River. He self-published his memoir Nearly 40 on the 37: Triumph and Trepidation on the Stewart-Cassiar Highway (Last Autograph Press 2013) with an endorsement from anthropologist Wade Davis.  As follow-up, Hughes’ Zero Avenue to Peace Park: Confidence and Collapse on the 49th Parallel (Last Autograph Press $18.95) is a motorcycle journey west into the Kootenays and beyond the Rockies, following close to the US border from Zero Avenue in Surrey to Waterton-Glacier International Peace Park. He’s joined for part of the journey by an American friend who rides alongside, adding an American viewpoint to the narrative. “Like Nearly 40 on the 37,” he says, “it’s a humorous and honest travel story that will take readers through major national parks and fading silver boom towns, sites of natural disaster and places of renewal.” 978-0-9918590-3-0