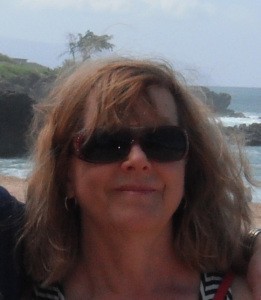 The little community of Lone Butte is named for a six million-year-old volcanic plug that rises some 200 feet above the Cariboo Plateau, It was once the hub of the Cariboo where area ranchers brought their cattle to load on PGE rail cars. As of 2013, it became home to novelist Ruth E. Donald.

“I first heard about Lone Butte almost twenty years ago,” Donald said, in 2015, “and I thought at the time that it was a romantic name, right out of the wild west. Since I’d always wanted to live on a ranch where I’d have lots of room for horses, I moved here from the Lower Mainland in 2013. In spite of the space between me and my neighbours, I’ve come to know more of them in the short time I’ve lived here than I did during several decades of city life. The pace is slower here – some call it being on Cariboo time – and every time I look up from my computer screen and see open fields, aspen groves and that big Cariboo sky, I know I’m in the right place.” R.E. Donald and her partner, Gilbert Roy, enjoy their Canadian Horses (Le Cheval Canadien), Canada’s own heritage breed, and other animals. “It’s still ranching country,” she says, “and on many of its roads you’ll encounter cattle guards and maybe even cattle, or often deer and moose. It’s a peaceful and scenic location for a writer, with easy access to a library, bookstore and other amenities in 100 Mile House.”

Ruth Donald’s whodunnits for her series called the Highway Mysteries feature a trucker detective named Hunter Rayne who is loosely based on her late husband, Jim Donald, a well-known figure in the B.C. trucking industry prior to his death in 1996.

As a former RCMP homicide investigator, Hunter Rayne travels far afield, driving a rig for a B.C.-based company, often aided by a sidekick she describes as “a garrulous biker with problems in impulse control.” Rayne’s boss and dispatcher, Elspeth Watson, is a no-nonsense gal who has earned her nickname Big Mother Trucker.

Each novel is named for the locale of the highway on which the hero travels. For instance, much of her second novel, Ice on the Grapevine, is set in and around Los Angeles; her fourth release, Sundown on Top of the World, is set in the Yukon and Alaska.

Donald worked in the transportation industry in various capacities from 1972 until 2001, for both air freight and trucking companies. She handled Accounts Payable at Pharmasave Pacific regional office from 2001-2008, and was the Recreation Coordinator for the Horse Council of BC from 2009-2012. The third novel in her series, Sea to Sky, was made available in a German translation, in both trade paperback and ebook editions, in 2015, translated by Ingrid Könemann-Yarnell, an ex-pat German living in the U.S. Next will be Sundown on Top of the World. “We chose Sea to Sky and Sundown on Top of the World,” Donald said, “as the first books to be translated due to the fact that many Germans love to visit the regions where the two novels are set.”

A fifth Highway Mystery, Yellowhead Blues, is scheduled for release in the first half of 2016.