#447 The Judsons of South Cariboo

A Mill Behind Every Stump
by Marianne Van Osch

Sage Birchwater reviews Marianne Van Osch’s A Mill Behind Every Stump, the story of the life and family of 94-year old Louis Judson, son of versatile American homesteaders and longtime operator of portable and bush sawmills in the South Cariboo.

In 2016, Judson talked to Doris Rufli of the 100 Mile Free Press. “I lived a busy and interesting life and that’s why I am still living and celebrating my 92nd birthday today,” he said.

Rufli reported that Judson “recently drove to Quesnel River from his Ruth Lake home to mine for gold and then picked apples in his yard ‘before the bears had a chance to feast on them.’ Louis is also the local ‘go-to-guy’ when dowsing for water is concerned, and having years of experience, he offers advice on trapping to all that seek his council.”  (Doris E. Rufli, “Louis Judson Story Written by Local Author,” 100 Mile Free Press, October 13, 2016 — Ed. 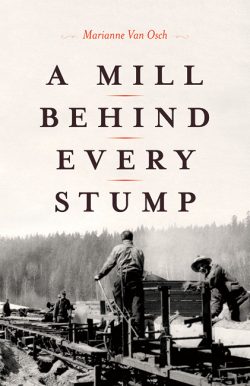 Marianne Van Osch breathes life into an obscure part of British Columbia with the release of A Mill Behind Every Stump. Forest Grove is the centre of a lake-dotted region east and north of 100 Mile House; it is off the beaten track.

This region is part of the unceded homeland of the Canim Lake and Esketemc Secwepemc (Shuswap) people who fished, hunted, trapped and gathered berries and medicines here for time immemorial until they were forced to share their once exclusive domain with non-Indigenous settlers.

Van Osch structures the book by following the life and times of the Judson family who first ventured into British Columbia from northern Washington State in 1910. She describes the hardships and challenges of the newcomers trying to survive in a harsh and unfamiliar land through homesteading, trapping, and eking out a subsistence lifestyle. Then she tracks the transition into a make-or-break sawmilling economy where a proliferation of small sawmills across the region opened up the country.

It is through the narrative of 94-year-old Louis Judson that Van Osch pulls back the curtain on this region and the Judson family’s efforts to overcome adversity through hard work and good fortune. 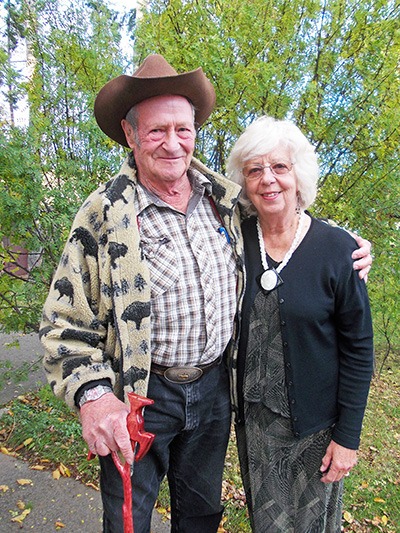 In the process the reader is introduced to obscure places like Ruth Lake, Bradley Creek, Eagle Creek, Canim Lake, and Forest Grove, riding the rise and fall of fortunes of a family legacy.

For several decades during the middle part of the 20th century it seemed like there was a (sometimes portable) bush mill behind every stump throughout the Cariboo. Then during the 1950s, bigger companies bought up the small independent sawmills and consolidated them into highly efficient lumber manufacturing plants centralized in the larger centres of 100 Mile House, Williams Lake, and Quesnel.

A Mill Behind Every Stump tells the human drama of this transition from bush mills to big industry following the lives of the people who were there to convey it.

Louis Judson was born in Ashcroft in 1924. He traces his family back to 1634, when his distant ancestor William Judson and his three sons sailed from Yorkshire, England, to Concord, Massachusetts. Two hundred years later the Judsons were well established as grain and wheat farmers in the western United States, but by the end of the 1800s most of the arable farmland in the American west had been settled.

That’s when Louis’ grandfather, Noble Roger Judson and his two sons Matney and Marion looked north to Canada. Their quest was to find work and land they could farm.

Like many early settlers Louis Judson has Native American ancestry. His grandfather Noble was befriended by Nez Perce Chief Joseph at Colville, Washington, who encouraged Noble`s union with his granddaughter, Adeline. 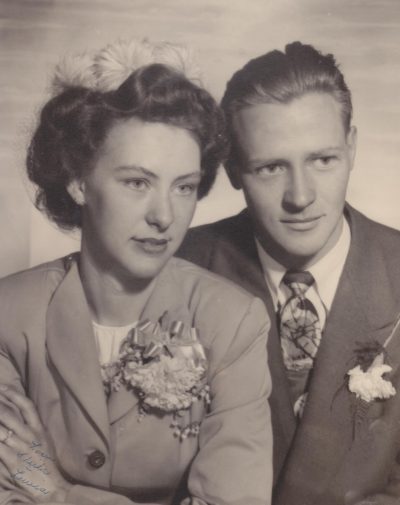 Adeline’s non-aboriginal father, Sanford Newton-Jeffries, was a member of the Lewis and Clark Expedition of 1804. Her mother, Chief Joseph’s daughter, was Nez Perce.

Noble and Adeline’s oldest son Matney was born in 1890. A year later their second son Marion (Louis’s father) was born on the Colville Reservation. Marion was given the Nez Perce name, Saultees, and was called Saultees at school and that`s the name written on his report card.

Noble and Adeline had other children but they apparently all died of diphtheria, a particularly deadly childhood disease at that time.

Adeline`s fate remains a mystery as Noble Judson and his two sons headed north on an exploratory trip by horseback into British Columbia in 1910. Matney was twenty and Marion was nineteen when they followed the Cariboo Wagon Road to 70 Mile House and turned off to Bridge Lake where Noble applied for a pre-emption. The local Secwepemc called it Fish Lake, and when the Judsons arrived the traditional fish camps were still in use like they had been for hundreds of years.

After kicking around British Columbia for three or four years, the Judsons returned to Washington State before the start of the First World War. Once the States entered the war, Marion was drafted and sent to Fort Lewis near Tacoma for military training. There he met Lillian Opal Hoover, and after a brief romance they were married on July 26, 1917.

Before they could embark on married life together Marion was sent to the front lines in Europe where he served as a batman (personal assistant) to a commissioned officer. When he returned home after the war, he and Opal started farming at Omak, in northern Washington. Two of their children, Alonzo and Marjorie, were born there. Opal also had a son, Daymond, from a previous marriage, who was born in 1914. 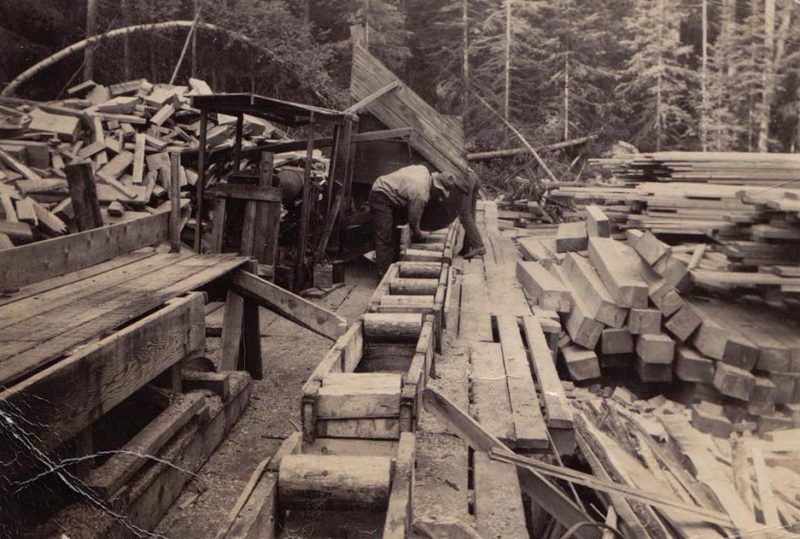 The bush mill at Bradley Creek where Louis lost his foot in 1947. Note the wooden rollers. Louis Judson photo

Farming quickly declined at Omak as more timber was cut and land was cleared. Water became scarce and the once productive land suffered drought and nothing would grow. That’s when Marion convinced his wife they would have a better opportunity in the Cariboo.

After selling their farm, the Judsons headed north in 1922 with Marion driving a freight wagon full of farming implements pulled by four horses. Opal followed in a covered wagon filled with bedding, the children, and household items. A milk cow was tied on behind.

They reached 100 Mile House after 22 days on the trail, and turned east off the Cariboo Wagon Road to Forest Grove where they found refuge in a tiny ten-by-ten-foot log cabin on Biss Road. 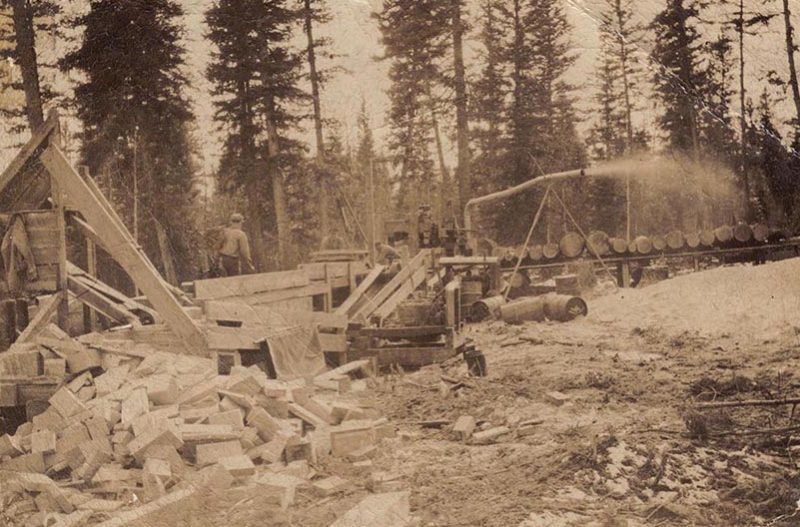 Marion worked at a variety of jobs over the summer. Then in the fall the family moved to Bedingfield Meadow 50 km north of Forest Grove where they spent the winter. They erected a cabin tent with a log base and log sides covered by a canvas wall tent.

It was a good location on a sunny slope with plenty of hay to feed their eight horses and milk cow, but it was quite remote.

In the spring of 1923, Marion and Opal filed a 160-acre pre-emption on Bradley Creek about five kilometres from Ruth Lake. It was here that Marion built their first permanent log home. 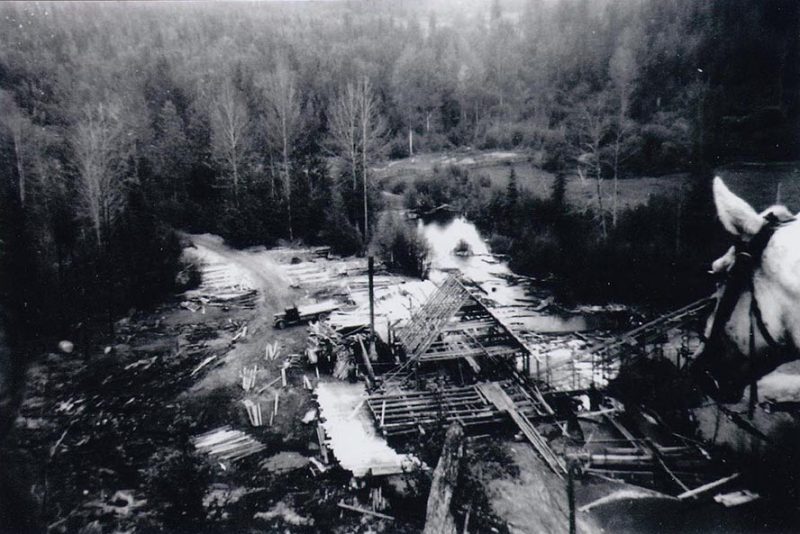 He ploughed up a narrow strip on either side of the creek that fed into Bradley Creek to grow some wheat, and in the process he unearthed a Secwepemc hide scraper and arrowheads. Louis said it was obvious to his parents that this had been a native hunting and fishing camp for a very long time. 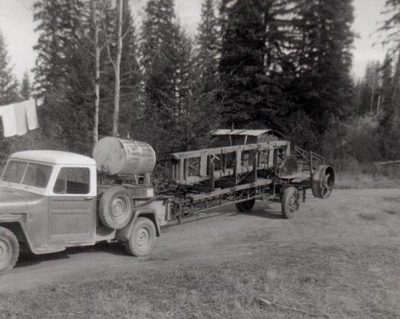 By the end of the summer the logwork was finished and Marion split cedar shakes for the roof.

In August, 1924 Marion’s father, Noble, and his brother Matney immigrated to Canada and took up pre-emptions further up Bradley Creek from Marion and Opal’s homestead.

In mid-September Marion brought his pregnant wife to 100 Mile House by team and wagon. From there she caught the Interior Transportation Stage to Ashcroft where Louis was born in Lady Minto Hospital on September 22, 1924.

That’s the backstory of A Mill Behind Every Stump.

The Judson homestead, Louis recalls, was remote from any settlement but there was always someone coming by. Grubline riders, cowboys, or ranch hands looking for a few days work would stop to help his dad build something, repair fences, cut firewood, or work in the garden for a place to sleep and enjoy a meal.

They also had Secwepemc visitors who were welcome to spend the night on their way to nearby fishing lakes. Marion could speak Chinook and his family`s kindness was reciprocated. On their way home from fishing, their native friends would drop off lingcod, trout, or a leg of deer. Sometimes they`d give them a sack of potatoes. 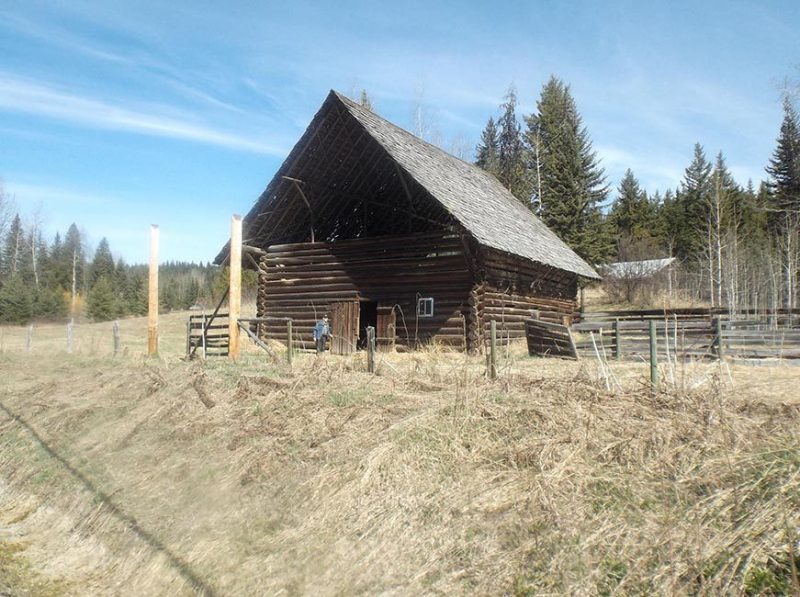 When Louis turned six, his father got together with neighbours to build Bradley Creek School because Forest Grove was too far away for young children to travel. They needed eight kids to qualify for a schoolteacher and they managed to rustle up enough children to qualify.

Bradley Creek School became the focal point for community activity with Christmas concerts, celebrations, and regular square dances to the music of a live orchestra. The Indigenous people were a big part of the local festivities until they were made to feel unwelcome by some of the straight-laced settlers who had moved into the area.

“My dad called the square dances and they usually lasted until dawn,” Louis reflected. “The natives came to every dance … and they were very good dancers. Then a couple of stuck-up women decided they shouldn`t be there and told them so. That was the end of them coming, and it was a real shame!”

Marion Van Osch does a credible job of conveying an important chapter of South Cariboo history through the observations and recollections of Louis Judson. She follows the nine decades of his life, retracing his steps and visiting old haunts. In the process she has added a valuable contribution to British Columbia’s unique and colourful past. 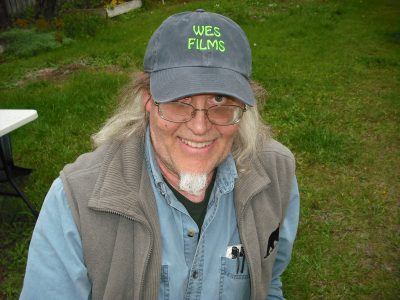 As a long-time resident of the Chilcotin, Sage Birchwater has written several books about the area including Chiwid (New Star, 1995). Born in Victoria in 1948, Birchwater was involved with Cool Aid in Victoria, travelled throughout North America, and worked as a trapper, photographer, environmental educator, and oral history researcher. Sage continues to make an enormous literary contribution to the Cariboo and Chilcotin, having served as the Chilcotin correspondent for two local papers for fourteen years while raising his family south of Tatla Lake. He has also lived in Taklayoko, where he was a freelance writer and editor, and Williams Lake, where he was a staff writer for the Williams Lake Tribune until his retirement in 2009. His most recent books are, with photographer Stan Navratil, Williams Lake: Gateway to the Cariboo Chilcotin (2004);  Gumption & Grit: Extraordinary Women of the Cariboo Chilcotin (2009);  The Legendary Betty Frank (2011); Flyover B.C.’s Cariboo Chilcotin Coast (with Chris Harris, 2012); and Corky Williams: Cowboy Poet of the Cariboo Chilcotin (2013). Sage’s latest book, Chilcotin Chronicles (Caitlin Books, 2017), was a BC Bestseller in 2017. 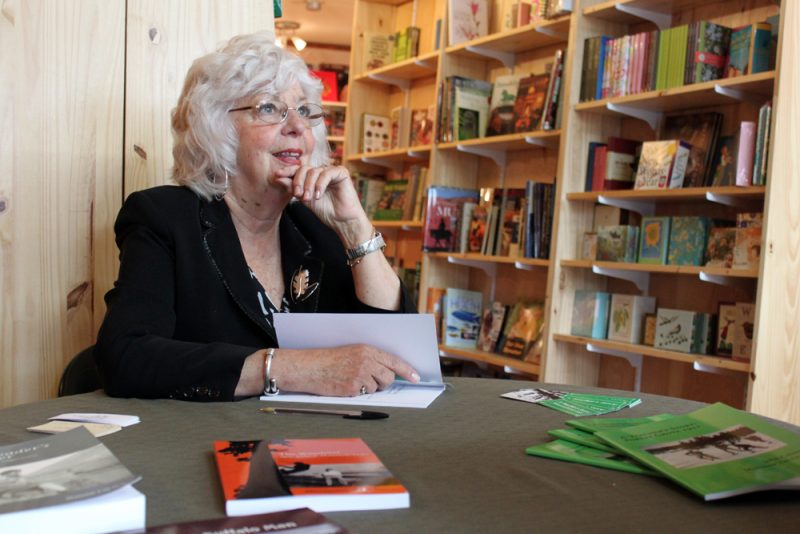