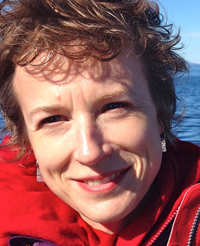 In the town of Terrace, after the Skeena River narrows under two bridges, it divides at Ferry Island, a little municipal park heavily forested with Cottonwood trees and Devil’s Club. “I have spent more of my life on this specific section of the Skeena River than on any other section,” says Sarah de Leuuq. “It represents both the ordinary nature of a river, and my everyday relationship with it, walking dogs there after work, snowshoeing it in the winter, running along it, going to gravel pit parties as a teenager.”

As the author of a narrative elegy entitled Skeena (2015), de Leeuw is deeply aware of the extraordinary power that the river exerts, how B.C.’s second-longest river floods, freezes, erodes, and even kills – but also always returns new life, year after year. “The section of the Skeena River that the City of Terrace now touches upon,” she says, “is a testament to how, even after thousands of years of human-river interaction, the river is fundamentally still something unto itself, something river-y, full of unshakable riverness.”

First written about extensively in Hubert Evans’ classic novel Mist on the River (1954), the Skeena River is known to the Tsimshian as ‘Xsan, meaning the “waters that flow from the clouds.” Praised as a North Country epic, and as a poem/assemblage of intelligence and care that “cracks open geology,” and as a “poly-vocal watershed of poetry,” Sarah de Leeuw‘s Skeena (Caitlin 2015) is a single narrative elegy and celebration for and about B.C.’s second-longest river. Sarah de Leeuw and her partner hand-screen printed each dust jacket. Sarah de Leeuw received the Dorothy Livesay Poetry Prize in 2013 for Geographies of a Lover. She has been a two-time recipient of a CBC Literary Award for creative non-fiction; and she won a Western Magazine Gold Award for the best article published in 2014 in British Columbia.

Review of the author’s work by BC Studies:
Front Lines: Portraits of Caregivers in Northern British Columbia
Unmarked: Landscapes Along Highway 16

Geographies of a Lover (NeWest Press 2011)

Review of the author’s work by BC Studies:
Landscape Along Highway 16

“No one believes the tales I have to tell,” she says, “the tales of balancing rocks and whales spitting on highways, of road fissures so deep that a constant stream of cement cannot fill them, tiny earthquakes always re-opening the pavement. Drink from the water near this fracture and your blood will be charged like a magnet; you will always return, a compass needle veering toward the magnetic north.”

De Leeuw has worked in a women’s centre and a logging camp; as a tug boat driver and a journalist. She is now completing her Ph.D in Cultural Geography at Queen’s University in Kingston. She describes her first book as a collection of essays about powerful people whose stories “are relegated to the land of nowhereness.” 1-896300-88-X — Heather Ramsay, BCBW 2004.