#424 In search of Laura Jamieson

The Last Suffragist Standing: The Life and Times of Laura Marshall Jamieson 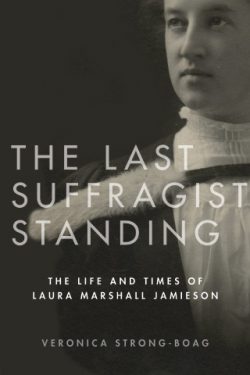 The Life and Times is an old-fashioned title, but nothing is old-fashioned about this book. The sub-title is especially appropriate for a biography of Laura Jamieson. She wrote hundreds of short articles, reviews, and speeches, from which the book provides extended quotations, but left few personal papers. From a variety of sources — including interviews with descendants and records left by contemporaries — Veronica Strong-Boag uncovered many details of Jamieson’s life, and has set them firmly in the context of the times.

After growing up on a poor Ontario farm, Laura Marshall Jamieson (1882-1964) briefly taught in the Crow’s Nest Pass, studied at the University of Toronto, worked for the YWCA in Stratford, Ontario, married a Liberal lawyer, John Stewart Jamieson, and moved to Burnaby. The focus of this book, however, is on Jamieson’s work for reforms, especially those affecting women, and her election to the provincial legislature to become, according to committed feminist and biographer Strong-Boag, the last Canadian suffragist to serve in a legislature.

Her education, her active role in Vancouver’s University Women’s Club, and her husband’s position put Jamieson into the middle class, but she was uneasy with that status. She criticized the “patronizing” attitude of some middle class women to the impoverished, their non- recognition of the rights of domestic servants, and the failure of suffragists such as Nellie McClung to seek other reforms, such as minimum wage laws, to improve women’s lives. Similarly, in the mid-1940s when women were still cautious about participating in public life, Jamieson complained of their “strong inferiority complex” and hesitation about taking on tasks of citizenship that would have the public see them “as ordinary people first and as citizens, before it thinks of them specifically as women” (pp. 158-59). 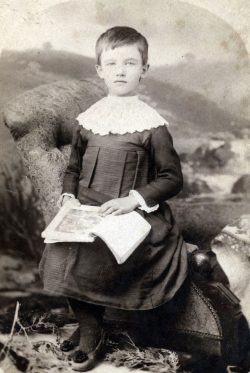 Laura Marshall as a child, circa 1888. Jamieson family photo

Jamieson practised what she preached. She saw education and internationalism as the keys to solving “global problems” and achieving “a fair deal for women.” As the mother of young children, her involvement in the Parent-Teacher Association (PTA) seems natural, but Strong-Boag suggests that Jamieson wanted to use the PTA to “promote internationalism” (p. 77). Active in the feminist and pacifist Women’s International League for Peace and Freedom (WILPF), she sought to ally the League with other progressive bodies. Yet, she was realistic. When the international situation deteriorated in the late 1930s, Hitler cured her of pacifism. She called for trade embargos on belligerents.

Jamieson did not ignore domestic issues. Given her husband’s part-time position as a juvenile court judge in Burnaby, a position to which she succeeded after his death, Jamieson became known as an expert on child welfare. She called for sex education, even for young children, and for the establishment of nursery schools and of community centres where older children could enjoy recreational and cultural activities. In 1938, she resigned her judgeship to resolve, through politics, what she considered the root cause of juvenile delinquency, the lack of “food and clothing” (p. 115), an argument she was still making in 1953. 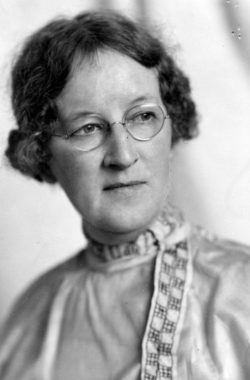 Although she could not vote for them in 1916, Jamieson favoured the provincial Liberals because they supported women’s suffrage. Despite their introduction of such reforms as Mothers Pensions, Jamieson thought the Liberals abandoned their progressive sympathies after granting the franchise, so she looked elsewhere. Attracted by the ideas of socialists about public ownership of utilities and equal pay for equal work, in 1920 she announced that she had joined the Federated Labour Party.

By supporting socialism and internationalism in the 1920s, Jamieson put herself “on the periphery of women’s political activity” (p. 78). Yet, when she ran as a CCF candidate for a provincial seat in a 1939 Vancouver by-election, some Liberal and Conservative women helped her successful campaign. Strong-Boag suggests that moving away from “mainstream clubwomen” may have contributed to Jamieson’s defeat in the 1945 provincial election (p. 161). That may be so, but in 1941 the Liberals and the Conservatives split the non-left vote; in 1945, Coalition candidates secured both Liberal and Conservative votes.

Jamieson was not long out of electoral politics. Elected as a Vancouver alderman, she argued for progressive reforms, particularly low-rental housing, but could not persuade Council to adopt this idea. In 1952, she re-entered provincial politics after the Coalition disintegrated, but lost in 1953 by a narrow margin to a candidate of the new Social Credit government. 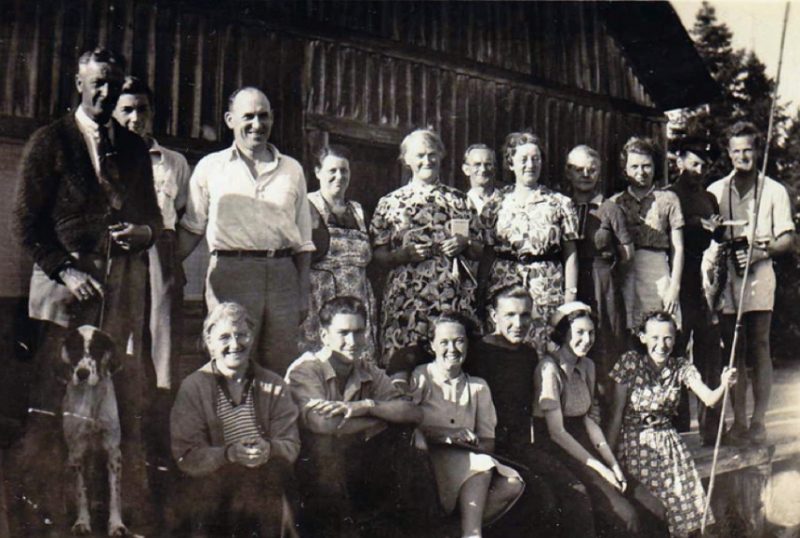 “A feminist champion of social democracy” (p. 4), Jamieson had been deeply involved with the CCF from its beginnings even though, as Strong-Boag notes, many party members assumed that men had the right to lead the party with women serving only in an auxiliary role. It is telling that one of Jamieson’s last public appearances was at the founding convention of the New Democratic Party in 1961 where she presided over a meeting of 300 women. In relating Jamieson’s story, Strong-Boag presents fresh material on the well-known divisions within the CCF, especially between democratic socialists or social democrats like Jamieson and doctrinaire Marxists, notably Dorothy Steeves, at times, the only other female member of the CCF caucus. 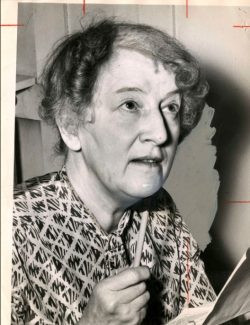 Outside the legislature, Jamieson called for “personal effort” (p. 89), which could be best expressed through co-operation in discussions of public issues. She combined her belief in the importance of educating people, especially women, about current events and the need to supplement her income. When he died of blood poisoning, her husband left only a modest estate and two school-aged children. Jamieson created study groups from whose members she collected a fee. She applied her belief in the value of co-operative housing by taking in boarders, a precedent for the communal residences for employed women she set up in Vancouver. Her favouring of co-operatives was sincere; she urged CCF members to patronize co-operative ventures such as grocery stores.

Strong-Boag rightly concludes that Jamieson was more concerned about injustice based on class and gender than on race. Jamieson did favour an easing of restrictions on immigration from China and India to permit family reunification but was cautious in speaking about the Japanese. Yet, during the war she endorsed the Vancouver Consultative Council’s demand for justice for Japanese Canadians while favouring their dispersal across Canada. 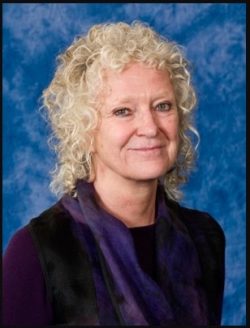 Similarly, Strong-Boag recognizes Jamieson’s imperfections especially in respect to the Indigenous peoples. The title of the first chapter, “The Girl from the Saugeen Peninsula,” not “A Girl from the Bruce Peninsula,” recognizes the traditional Indigenous name for this region of central Ontario, but Saugeen is not likely a place name that Jamieson would readily recognize. Noting Jamieson’s “ignorance” of how settlers dispossessed the original residents, Strong-Boag sketches the process.

In British Columbia, Jamieson appears to have had little interest in its Indigenous residents, but in what was likely a draft for a speech relatively late in her career, Jamieson wrote approvingly of efforts to integrate Indigenous children into the public schools of Oliver. That assertion, Strong-Boag argues, was “utterly grounded in ignorance” (p. 207). Times change. Jamieson’s son, Stuart, an economist at the University of British Columbia, was an author of a 1958 publication that set out to make “a comprehensive study of modern Indian life” in British Columbia.[i]

The Life is lively and informative; the descriptions and analyses of the Times make a valuable contribution to the wider historiography of women’s political activities in Canada and to British Columbia politics in general. Jamieson would undoubtedly be pleased with this study of her life and times. 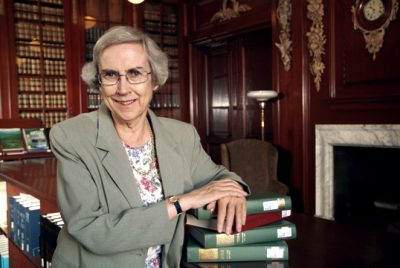 Patricia E. Roy, a native of British Columbia, is professor emeritus of History at the University of Victoria where she taught Canadian history for many years. Her own research has been mainly in the field of British Columbia history and she is best known for her trilogy of books on the responses to Chinese and Japanese immigrants: A White Man’s Province (1989); The Oriental Question (2003), and The Triumph of Citizenship (2007). All were published by UBC Press. She continues to publish articles in that field. Her most recent book is Boundless Optimism: Richard McBride’s British Columbia (2012), also published by UBC Press. 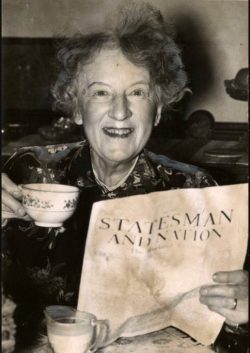