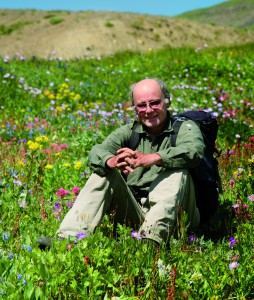 You might not know that B.C. is home to the oldest, well-preserved human remains in North America.

After three sheep hunters found a human body in a melting glacier in B.C.’s Tatsenshini-Alsek Park near the Yukon border in 1999, radiocarbon dating of the deceased, nineteen-year-old male determined the “Ice Man” was between 300 and 550 years old (circa 1450–1700 AD).

Based on traces of pollen found in his colon, scientists say he was traveling in the summertime. When DNA testing of 240 volunteers from the local Champagne and Aishihit First Nations revealed 17 of them were related to the remains through their maternal line, deep tribal connections to the area were confirmed.

Kwäday Dän Ts’ìnchi means ‘Long Ago Person Found’ in the Southern Tutchone language. Artifacts found with the remains included a walking stick, a knife and a robe made from about 95 gopher and squirrel skin sewn together with sinew. Similar gopher skin robes are still made by the Champagne and Aishihik people today.  978-0-7726-6699-4

Dakwäkäda (Haines Junction), YT and VICTORIA, BC – Eighteen years since three hunters stumbled upon his body on a remote BC glacier, the story of a young Indigenous man, frozen for hundreds of years, is told in the Royal BC Museum’s comprehensive new book, Kwädąy Dän Ts’ìnchį: Teachings from Long Ago Person Found.

When his remains were discovered on an unnamed mountain in Tatshenshini-Alsek Park in the Champagne and Aishihik First Nations (CAFN) Traditional Territory, his story had faded, even from the long memory of the region’s people.  First Nation elders decided to call the discovery Kwädąy Dän Ts’ìnchį—Long Ago Person Found.

“This discovery reaffirms our historical tie to the land,” says CAFN Dän nätthe äda (Chief) Steve Smith.  “It led to important discussions about respectful, culturally appropriate treatment of the find and artefacts.  And it also helped us to build a unique partnership with the Royal BC Museum and other outside experts, balancing traditional values with more scientific approaches.”

“More than 17 years have passed since the Kwädąy Dän Ts’ìnchį man was found, and in that time a remarkable amount has been learned about his life, death and the landscape that is so inextricably linked with the story of this young man,” says Prof. Jack Lohman, CEO of the Royal BC Museum. “The backdrop to this time period has been of mounting global recognition of Indigenous rights and the urgent need for environmental protection. It is my hope that this timely work will serve as an example for institutions seeking to undertake meaningful and collaborative research in partnership with First Nations in Canada.”

The discovery of the Kwädąy Dän Ts’ìnchį man was unprecedented in North America. His remains, preserved in glacial ice, offered answers, as did the traditional knowledge and experience of the First Nations people in whose territories he lived and died.

With contributions from First Nation citizens and other experts around the world, the book is a model for how diverse ways of knowing, in both scholarly and oral traditions, can complement each other to provide a new understanding of our complex histories.  It is edited by Dr. Richard J. Hebda (Curator Emeritus at the Royal BC Museum), Sheila Greer (CAFN Heritage Manager) and Alexander P. Mackie (formerly with BC Archaeology Branch).

This is a story of significant historical heft, reflected in the size of this large-format paperback: at 704 pages, illustrated with colour and black and white photographs, it retails for $49.95.

Kwädąy Dän Ts’ìnchį: Teachings from Long Ago Person Found is available at local bookshops, the Royal Museum Shop and online through the Royal BC Museum at https://publications.royalbcmuseum.bc.ca/.

Hebda and Mackie will be reading excepts from the book and answering questions from the public at the book launch, in Newcombe Conference Hall in the Royal BC Museum, on Thursday, November 9 at 5:30 pm. Copies of the book will be available for sale and signing by the editors. Admission by donation.

The book will also be introduced in the Yukon during the Haines Junction Mountain Festival, which takes place December 8-10, 2017 in Dakwäkäda (Haines Junction), Yukon Territory (http://www.yukonmountainfest.ca/).

About the Champagne and Aishihik First Nations

The Shadhäla, Äshèyi yè kwädän (Champagne and Aishihik First Nations) is a self-governing First Nation located in the Yukon Territory and northwest British Columbia.  Their homeland is a land of kwata (forests), dhal (mountains), taga (rivers), man (lakes) and tan shį (glaciers), with spectacular scenery and diverse resources and cultural riches. The land has offered mbat (food), ur (clothing) and kų (shelter) to CAFN ancestors for many generations.  CAFN has more than 1,200 Dän (people) and is one of the largest of the 14 Yukon First Nations.