Ormsby #108 Iceland in their veins

From B.C. pioneer Gilbert Sproat to k.d. lang, descendants of Icelanders are throughout Western Canada. 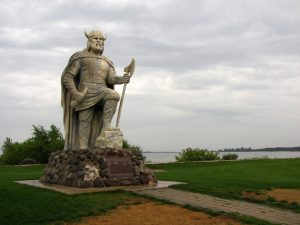 New Iceland was formally created by Canada in 1875. A modern Viking statue at Gimli, Manitoba.

REVIEW: White Settler Reserve: New Iceland and the Colonization of the Canadian West Who knew that almost 1,500 Icelandic immigrants came to Manitoba in the 1870s after vigorous lobbying by B.C.’s first Agent-General in London, Gilbert Malcolm Sproat?

Today, tens of thousands of descendants of the Icelanders are scattered throughout Canada, including writer W.D. Valgardson of Victoria and music artists k.d. lang and Tom Cochrane.

In White Settler Reserve, Ryan Eyford – himself of Icelandic origin – explores the motives and details of Colonization Reserves in late nineteenth century Canada and of Icelandic migration to the east shore of Lake Winnipeg in the 1870s.

In White Settler Reserve, historian Ryan Eyford meticulously reconstructs the fascinating but little-known story of the late nineteenth-century mass migration of Icelanders to North America, and more specifically, to a specially created reserve on the western shore of Lake Winnipeg in present-day Manitoba.

He traces the personal motivations and experiences of these Icelandic settlers but also puts the story of the short-lived New Iceland reserve into broader national and international contexts of immigration and colonization.

What is most compelling about White Settler Reserve is the way the story of New Iceland helps to complicate and enrich understandings of the colonization of Manitoba and the North-West Territories by both government and immigrants in the late nineteenth century.

“New Iceland” was created by a federal Order-in-Council in October 1875 under the Dominion Lands Act, which after 1874 laid out rules for the creation of colonization reserves.

Colonization reserves were parcels of land set aside for particular groups of immigrants intended to attract group migration to remote and undeveloped lands in order to promote effective and efficient colonization. They were an important part of the suite of technologies used to harness both the productive and reproductive labour of “desirable” settlers to displace and marginalise Indigenous peoples and achieve the westward extension of the effective control of the Canadian state.

New Iceland was one of the first colonization reserves, and received its initial cohort of settlers in 1875. Numbering about 250, this group was composed mostly of families with young children, and the following year they were joined by about 1,200 members of what is called the Stóri Hópurinn (the Large Group) arriving from Iceland in 1876. These movements to the Prairie West were part of a mass migration of Icelanders between 1873 and 1914. During this period, approximately twenty per cent of Iceland’s population left, and the vast majority — some 14,000 — came to Canada. Like many immigrant groups, their motivations varied, but most importantly, Eyford notes, “[i]n New Iceland, the barriers to family and household formation that existed in Iceland – lack of access to land and restrictive social legislation — were removed” (p. 92).

But life was difficult for the settlers who arrived at New Iceland, and Eyford details high mortality rates due to diseases including scurvy, smallpox, and scarlet fever and the hardships imposed by quarantines on the settlement intended to control the spread of smallpox. He also examines the challenges of establishing agricultural homesteads in the remote reserve, issues with government support and ownership, and the devastation of the floods of 1880-1.

In 1897, New Iceland’s reserve status was rescinded and by then only twelve members of the original group remained. However, the settlement had by this time become established (though not very prosperous), and some of the names given to the homesteads and towns by the Icelandic settlers, still remain. The subject of reserve creation is likely to be familiar to those with an interest in the history of British Columbia in no small part thanks to Cole Harris’s masterful Making Native Space (UBC Press, 2002). Eyford’s approach mirrors aspects of Harris’ work, and he notes that the intent of both Indian and colonization reserves was to assimilate Indigenous people and immigrants “into an Anglo-Canadian agrarian, economic, political, and social order” (54).

Colonization reserves shared borders with Indian reserves, and Indigenous people are not absent from Eyford’s narrative. He examines the multi-faceted historical interactions between European, Indigenous, and Canadian individuals and groups. In this, his work bears a similarity to Renisa Mawani’s detailed and compelling Colonial Proximities (UBC Press, 2009) which examines the three-way relations between Indigenous people, Chinese settlers, and settler Canadians in the context of B.C. salmon canneries in a similar period (1871-1921). But B.C. history buffs will also find connections in White Settler Reserve in the person of Gilbert Malcolm Sproat, a key figure in the creation of the Indian reserve system through his work with the Joint Indian Reserve Commission in British Columbia between 1876 and 1878 (see Making Native Space).

Earlier, Sproat had written his classic account of life as a lumberman on Alberni Inlet, bearing the sibilant but gauche title, Scenes and Studies of Savage Life (London: 1868). In the process he gave his name to Sproat Lake, west of Port Alberni. In White Settler Reserve, Eyford identifies Sproat as playing a key role in advocating for group settlement and colonization. Sproat, the son of a crofter in the Scottish Highlands, was focused on ways to colonize the west effectively through private means in order to promote development instead of land speculation.

Although Eyford notes that it is not possible to concretely identify the impact of Sproat’s letters to the minister of agriculture and an 80-page dissertation on the subject, it is “suggestive that Ottawa’s first attempt to promote group colonization in the Northwest occurred a few months after he had submitted them and largely conformed to his recommendations” (58).

For those with a special interest in the history of colonialism, immigration, or Indigenous-Settler relations, White Settler Reserve may seem curiously anachronistic. There is very little in the way of engagement with developments and published research from the past decade in areas such as race and difference, Indigenous knowledge and history, or settler colonial analysis and theory.

Instead, Eyford places his work in conversation with important late twentieth century work in the areas of liberalism, new imperial history, and social and cultural histories of Indigenous-immigrant interaction in Canada. Eyford does not discuss why he chose to exclude recent and relevant work, but readers will themselves draw connections between White Settler Reserve and those more recent developments. Through his use of both English and Icelandic language sources, meticulous historical research, and a clear and readable writing style, Eyford has created an engaging book that connects histories of immigration with histories of colonization in western Canada. In so doing, he challenges implicit assumptions about the make up of the settlers who were drawn to the Canadian west and into the colonizing projects of the Canadian state.

A particularly powerful aspect of White Settler Reserves is the richly detailed portrait it paints of the “First New Icelanders” who formed communities in this colonization reserve. By bringing their names, experiences, and struggles to this new audience, Eyford has helped to ensure their stories will not be forgotten.

Emma Battell Lowman is a Settler Canadian originally from the overlapping territories of the Haudenosaunee and Anishinaabe, near Niagara Falls, Ontario. She is a Lecturer in the History of the Americas at the University of Hertfordshire, UK. Her work focuses on Indigenous-Settler histories in British Columbia, settler colonialism, Indigenous resurgence, and decolonization in North America, and the history of crime and punishment in Britain. Emma holds a Ph.D in Sociology from the University of Warwick (UK) and an MA in History from the University of Victoria (B.C.). She is co-author with Adam J. Barker of Settler: Identity and Colonialism in 21st Century Canada (Fernwood Press, 2015).

Adam J. Barker is a Settler Canadian originally from the overlapping territories of the Haudenosaunee and Anishinaabe, near Hamilton, Ontario. He is currently a research associate on the Carceral Archipelago Project (University of Leicester, UK), and will soon take up the post of Lecturer in Human Geography at the University of Hertfordshire. His work focuses on the production of settler colonial space and identity, processes of social change, and contemporary decolonization activism. Adam holds a Ph.D in Human Geography from the University of Leicester and an MA in Indigenous Governance from the University of Victoria (B.C.). With Emma Battell Lowman he has written Settler: Identity and Colonialism in 21st Century Canada (Fernwood Press, 2015).