In the spirit of Violette Szabo 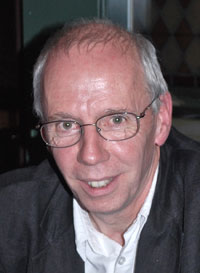 John Wilson revisits World World I for his 32nd book, A Dangerous Game (Doubleday $14.99), which pays tribute to the resistance and spy network in Belgium called Le Dame Blanche. This name ‘The White Lady’ was derived from a legend that predicted the fall of the German monarchy would occur with the appearance of a woman dressed all in white.

By the end of the First World War, there were an estimated 13,000 agents in this underground resistance network, including many girls and women. His protagonist is a teenaged student nurse, Manon, who enjoys cycling into beautiful Bruges. After she becomes a conduit for information to the British, she uncovers crucial details about where deadly German weaponry is stored–only to discover that innocent people are being killed on both sides of the front. Always realistic and well-researched, his novels for young readers about both World Wars are not dumbed down or schmaltzy; rather they are rooted in facts and documentary realism. This one is dedicated to Violette Szabo (shown on cover), a real spy from the Second World War who, at age twenty-three, was executed at Ravensbruck concentration camp in February, 1945. 978-0-385-68307-4