From Original Potato to 2113 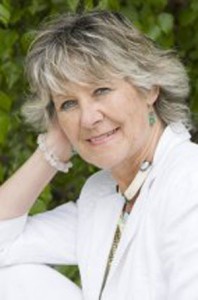 Under her pen name Agnes Toews-Andrews, Elizabeth Blakely has moved to the Kootenays and published a “paranormal novel,” 2113 AD: The Future is Here! (Isis Moon) in which she takes the reader on a journey across North America 100 years from now. Throughout the book are flashbacks to the present Earth changes including solar flares, increased cosmic rays, galactic alignments, CME’s and geomagnetic changes resulting in psychological and physical human changes. “The good news is the Ascended Masters have held special equipment within Mt. Shasta for they knew a time was coming when the planet would require these objects and technology.” Also the author of a book about goddess worship, Elizabeth Blakely is a macrobiotic cooking and Reiki instructor who has credited a six-week diet of watermelon, wheat, greens and potatoes, followed by a macrobiotic regime, with curing her ovarian, breast and uterine cancer. She has travelled to the Middle East, south-east Asia and the Caribbean to research the potato and self-published The Original, The Incredible Potato: A Cookbook and History (Isis Moon/Centax Books 2000). Further travels abroad resulted in a memoir called Garbage and Flowers: My Year’s Sojourn in the Holy Land (Isis Moon 1997), a chronicle of her multi-dimensional journeys of mind and emotions. She is currently a director of the Kootenay Literary Society.